This is the first Random Wednesday entry. I promise to try and post something every wednesday or thursday morning or tuesday night. In honor of the lovely book 'Dark Angels' by Karleen Koen, I've decided to give you a little taste of one of the main characters in the book: Queen Catherine. I really liked Queen Catherine. I felt extrememly bad for her, because of her husbands public snubbings by publicly showing affection to his young and pretty mistress. Even though many people thought she was an ugly bird-like woman she had a heart of gold. She's one of the many queens that were wronged by her royal husband.  However, she never sat by idly, she would demand respect. The King also sided with her and would see that his mistresses would give her the respect she deserved. 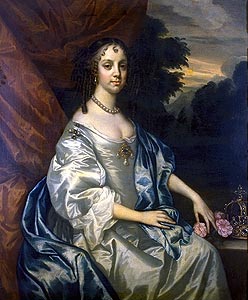 When King Charles, her husband, first laid eyes on her, he wrote to his sister:

“Her face is not so exactly as to be called a beauty, though her eyes are excellent good, and nothing in her face that in the least can disgust one. On the contrary, she hath as much agreeableness in her looks as I ever saw, and if I have any skill in physiognomy, which I think I have, she must be as good a woman as ever was born. You will wonder to see how well we are acquainted already; in a word, I think myself very happy, for I am confident our two humours will agree very well together.”
Catherine was born Catarina Henriqueta on November 25th 1638 in Portugal. When she became queen, she wasn't a popular queen, not only for her being Catholic, but because she none of her pregnancies came to term. Which means she never gave the King and the people an heir. However, she was well thought of because she brought tea to England and made England into a tea-drinking country.
Even though she never gave the King any childern, he always held her in high respects. Many people pushed the idea of divorce in his direction, but he always refused.
Catherine would die December 31, 1705 and was buried at the Jeronimos Monastery in Belem, Lisbon. 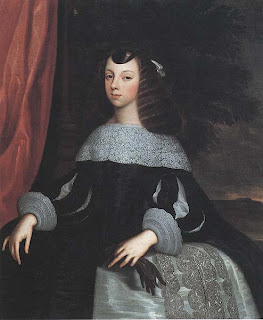 I love Catherine, no matter what Charles sure loved her. Jean Plaidy hinted in her "Loves of Charles II" that she was infertile because of the deforming martingales worn by the Portuguese. I still want to read her whole story. Great post, I am going to start doing more of these again too. I got some good post ideas up my sleeves.

I do believe that Charles really did love her, in his own way. If he didn't he would've divorced at the first mention of it. Plus, he always picked her over his mistresses. I also read that about the martingales. I also believe that it could've been the blood type thing. I can't remember how it excatly goes, but when a women has negative blood and the baby has the father's positive blood type, the woman's body will repel the baby. I learned that in my science class. Thats a main theory I have about a lot of couples back in the day why so many women had miscarriages for no reasons.

Oooh, I hope you do start having more of those! I love reading random things. ^.^