I just wanted to wish everyone a happy and merry St. Patty's Day. Today is the day of green beer and little green men. It's not a day for just the Irish to celebrate, but for everyone to enjoy! I've seen more green today at my school and randomly on the street then I've seen in a long time. This is my first St. Patty's Day as a college kid, so of course I have to go to a party tonight. Don't worry, there will be no drinking. =D I hope everyone has a fun and SAFE St. Patty's Day. Here's a little historical tidbit about the man behind this day: 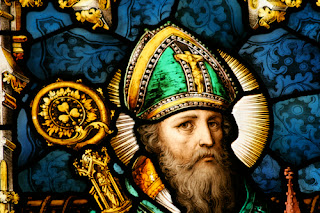 "Who Was the Man Behind St. Patrick's Day?

For starters, the real St. Patrick wasn't even Irish. He was born in Britain around A.D. 390 to an aristocratic Christian family with a townhouse, a country villa, and plenty of slaves.
What's more, Patrick professed no interest in Christianity as a young boy, Freeman noted.

At 16, Patrick's world turned: He was kidnapped and sent overseas to tend sheep as a slave in the chilly, mountainous countryside of Ireland for seven years. (See Ireland pictures.)
"It was just horrible for him," Freeman said. "But he got a religious conversion while he was there and became a very deeply believing Christian."

St. Patrick's Disembodied Voices
According to folklore, a voice came to Patrick in his dreams, telling him to escape. He found passage on a pirate ship back to Britain, where he was reunited with his family.
The voice then told him to go back to Ireland.
"He gets ordained as a priest from a bishop, and goes back and spends the rest of his life trying to convert the Irish to Christianity," Freeman said.
Patrick's work in Ireland was tough—he was constantly beaten by thugs, harassed by the Irish royalty, and admonished by his British superiors. After he died on March 17, 461, Patrick was largely forgotten.
But slowly, mythology grew around Patrick, and centuries later he was honored as the patron saint of Ireland, Freeman noted."

To learn more about this gloriously green day click here