(Okay. I finished 'La Dame Aux Camelias' by Alexandre Dumas fils. Which translates into 'The Lady of Camelias' by Alex Dumas Junior. It wasn't a horribly long book, only 200 pages or so. Firstly, there is a movie loosely based off this book called 'Camille' which was a wonderful movie. Also, there are many plays based off the book, which I would love to see.) 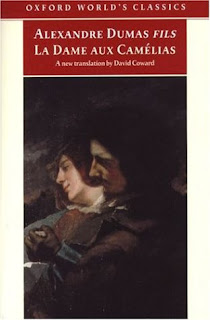 
"In 1844 Dumas fils began an affair with Marie Duplessis, one of the most desirable courtesans in Paris. After Marie died of consumption on 1847 at the age of 23, Dumas turned their love affair into one of the greatest loves of all time. Armand casts caution to the winds as he pursues his passion for Marguerite, for whom love has become her only hope, her redemption even. But there is a price to pay. If all the world loves a lover, society calls passion to order."


When I began reading, I was a little confused Marguerite was dead already. I was baffled and a little upset that the story had already finished pretty much. However, I pushed myself to keep reading. It turns out Armand comes into the picture and he's all sad and depressed because his love is dead. Armand and the narrator becomes fast friends.  The narrator has Armand tell his and Marguerite's love story. After then the book did become better. Thank goodness.

I sort of fell for this story, I think it shows how sometimes love isn't perfect and it shows no matter how much you may love someone, you can't be together. It showed the realism of how different social classes could never be together.

Armand is the guy every girl wants, loyal, loving, dedicated, and is willing to put his reputation on the line for you. Marguerite maybe a courtesan, she does seem to have a heart-of-gold. I love the characters and how the story unfolds, even though I knew she was going to die at the end, I rooted for their love the whole way. I was hoping they would be together forever, but that's not reality. It's a wonderful read for those who want to read about true love. The only thing I didn't like about it was the beginning. I think that it confuses readers and it spoils how the story ends. I sort of know why he wrote the beginning like that (because he explains his reasons a tad bit), but I hate when books do that. Also, I despised the character Madame Prudence, she was just an annoying unneeded character (in my view).

I grant this book 4 stars. I do think everyone should either read the book or see the play of it. It's a story that will continue on for a long time. I will, of course, read this novel again.
^.^