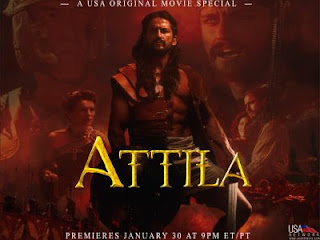 Length: 177 mins
Released: 2001 (TV)
Genre: Action
Rating: unrated
Directed By: Dick Lowry
Where I Got It: Borrowed it from Library


'Attila' stars Gerard Butler as Attila and Powers Boothe plays Flavius Aetius. This movie is about the rise and fall of the Hun King. It starts off with Attila as a child being trained by his father. His father is killed in a raid from an another Hun group. It goes on to show Attila being adopted by his Uncle who is a king. Attila, since being a child, as had an ambitious and courageous spirit. After little Attila is all grown up, we are introduced to the cunning and witty Flavius Aetius who is Rome's finest general. However, he did something bad and was thrown in jail, but the Empress and her son allow him pardon so he can defeat Attila. The story goes on to show how these two power and witty men pull on the string of power and match each other word for word and action for action.

Mmmm, I love Gerard Butler. I think this movie was a foreshadow for him to be casted in '300'. It was a pretty good movie. It didn't get the recognition it deserved. Personally, I think it would've had a shot at winning a Golden Globe or an Oscar. Who knows. Butler and Powers did a wonder job! The other actors were just as great at their roles. I'm really glad this movie caught my eye.

The writing was good, the costumes were accurate, the actors did a fabulous job, and etc. The only negative thing I can think of right now is how they choose to end it. I liked it to a point, but it was missing something. I believe the whole movie was missing something....I can't pinpoint it. Maybe it was lacking more depth in the main characters or something. You'd have to see it, to see what I mean. However, it was a fantastic movie! I do suggest everyone who loves Gerard Butler or any of the actors to see it. Also, if you love that time period, go find it and see it. Out of five stars, I'm going to grant it....5 stars. Yes, five. ^.^

Would I Watch Again?:
Meh, probably. 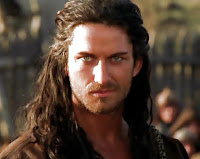 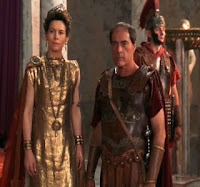