Book Review: Castle of the Wolf 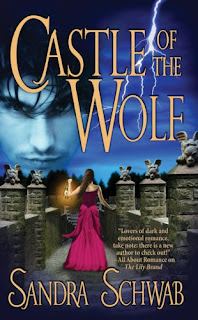 "Celia Fussell's father was dead, and she was reduced to the status of a poor relation in the house of her brother - the new baron - and his shrewish wife. A life of misery loomed ahead.

But, no. There was hope. Deep in the Black Forest, the Great Duchy of Baden, was Celia's inheritance. Among fir trees so dark they almost looked black, the Castle of Wolfenbach rose, a skeletal ruin adorned by gargoyles where even locals feared to tread. It was a fortress of solitude, of secrets, of old wounds and older mysteries. But it was hers. And only one thing stood in her way: it's former master, the hermit, the enigma...the man she was obliged to marry."

This book was not at all what I thought it would be. Well, I really had no idea what I was in for. I mostly picked this book out because of the cover and because it was set in early 1800s Germany. I was having a taste for the German culture. I had never heard of Sandra Schwab, so I was bound to be very critical when I opened to the first page. Also, it was marked as a 'Paranormal Romance', so this was another first for me.

It was a little slow to begin with, but my interest sparked about chapter 4 when Fenris arrived. Chapter 2 or something like gave a glimpse of him, but chapter 4 he made his grand entrance. I loved this character. He's deeply haunted by his past and by what he did to his family. He's not a typical character that I've seen so often. He's far from perfect. Far from it. When he was younger he ran away from home to join against the evil Napoleon. During the war he lost his leg. A jaw-dropper for me. Authors love to avoid having their characters have a huge physical disability.

I guess you could classify this as a Beauty-and-the-Beast remix, but it has much more depth than that. The story was very calm and didn't have too much going on until near the end, but if you pay close attention things are building and building. It was brilliant how she wrote the story. She had both main characters love fairy tales. Especially Celia. Celia has a nasty habit of thinking life is like a fairy tale. Her brother had yelled at her about this saying that "life is not a fairy-tale". I love how the author added little tid-bits of fairy-tales into the story.

I didn't see much of paranormal parts in it. The castle and the gargoyles are the only things of creepy material Sandra Schwab put in there. The gargoyles have some narrations scattered about the book, which I adored and I think added to the story.

To be honest, I ate this book up. I could hardly put it down. I found interesting and amazing. I saw myself in both characters. Honestly, the only thing I didn't like about the book was the lack of action. However, the author somehow made it so it wasn't boring. It was far from boring even though there was a lack of action occurring. I liked this book a lot and I have no choice but to grant this book 5 stars. I highly recommend it to those that love a love story or to those who love the time period. It shows a taste of Germany in the 19th century.

Carole, thanks for this lovely review of CASTLE. It's a novel very near and dear to my heart as I based the German setting on my childhood hometown, and a lot of the descriptions of the Black Forest echo my own childhood memories.

It's such an honor knowing you like my review and decided to comment on my blog. I'm very glad I read it, I loved it.