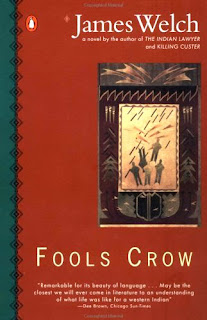 "The year is 1870. Located in the Two Medicine Territory of northwestern Montana is the camp of the Lone Eaters, a small band of Blackfeet Indians. Their life consists of a timeless round of activity, deeply rooted in the land and the seasons and in reverence for the customs handed down from the Long Ago People. But the ever-increasing presence of the Napikwans-white men-threatens this existence. Fools Crow, a young warrior and medicine man of great vision, has seen the future. He knows his tribe must either fight a brave but futile war or surrender their lands and their way of life.
In 'Fools Crow', James Welch's magnificent stylistic gifts are deployed to full advantage, allied with a subject of tragic consequence: the lives and fate of his Blackfeet ancestors."

LOVE THIS BOOK! James Welch has left me speechless once again. It's hard to say all that I liked about this novel. Not only did it show you the lives of the Blackfeet, it sucked you in and made you feel like you were there. It's make you feel like your catching all this on camera. It was wonderfully written. In some twisted way it was like a soap opera, but more realistic. I'm not sure if that's a compliment or not...

The book is mostly about Fools Crow and his tribe. It starts off when Fools Crow was just named White Man's Dog and he's pretty much the tribe "loser", because he has no luck or anything. It starts off a little slow, but it picks up after a couple chapters. The story is wonderfully written. There are no words to describe it.

There were only two things I didn't like about this book. One, they killed my favorite character off...I can't say who it was, but I was VERY upset. It happens a lot though, my favorite character usually dies if it isn't the main character. If its a side character, the writer loves to kill him/her off. And two, I hate how Mr. Welch jumps the narration around in the middle of a chapter, it bugs me. I tend to get confused on who's thinking what for a moment. But that's it.

All-in-all, it was not let down. These type of stories tend to be very hard to write. You need a level of understanding of the culture and of the people who lived in those times. James Welch did a fantastic job! I think everyone should read this book. It shows more than one viewpoint of the issues in those days and it shows a different culture many people haven't been introduced to. Now I'm just waiting for a novel like this to be about my Creek people. I haven't found one that really makes me speechless like this novel did. I grant this book 5 stars! WOOT WOOT!