(Elizabeth Chadwick must have written this book with magic. I am officially part of the club that LOVES this book....) 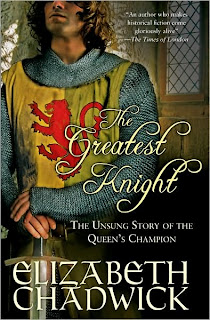 
"A penniless young knight with few prospects, William Marshal blazes into history on the strength of his sword and the depth of his honor. Marshal's integrity sets him apart in the turbulent court of Henry II and Eleanor of Aquitaine, bringing fame and the promise of a wealthy heiress as well as enemies eager to plot his downfall. Elizabeth Chadwick has crafted a spellbinding tale about a forgotten hero, an ancestor of George Washington, an architect of the Magna Carta, and a legend of chivalry - the greatest knight of the Middle Ages."

*clears throat* Where to begin? At first I was a little daunted by the size of the book. Yes, I've had my fair share of large novels, but I usually know what I'm getting into before I pick up the book. I'll admit it...I never heard of William Marshal before. That's why I was little uneasy about the size of this book. I wasn't sure, but many people recommended this book for me to read. I'm so glad that listened.

Chadwick brought this tale of William Marshal to life. She once again gave life to long-dead hero. Everytime I opened the book, I felt like I was there. I felt like I was in the room as a squire or some maid. This book embodies how a Historical novel should be. It's not boring and it's not over the top. I loved William Marshal. Many people have stated this and I am now one of them. He was such a great guy. Loyalty was his code. He was a man ahead of his times. He may not have been able to read or write, but his ideas and manners far-reached many of the men of that time. That's why Queen Eleanor respected him and wanted him around.

There's nothing I can really say that's negative. I have forced my evil-and-mean side to come out. Umm, one of the only things I didn't like about this book was that....it ended. Haha. No but seriously, I didn't like the length that much and also I didn't like how it would change narrative out of the blue. I sometimes found myself confused, so I would have reread and figure out who's viewpoint I had drifted into. Other than that, I loved it. I grant this book 5*s. Woot woot!