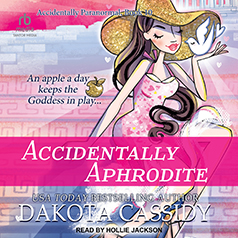 Book 10 in the Accidentally Paranormal series

Good narration, she made them all seem fun and relatable, though one of the voices was not a fav of mine. Her book might not be for me. But the rest of the voices were good.

I am aware it is book 10, and there were a lot of side characters that must have had their own books. But in the end it did not matter. This was Quinn´s book, and those side peeps were her new friends. With their own baggage.

It was a shortish fun story. Quinn goes to Greece after her ex left her. Boom. Magic! Big books and the powers of Aphrodite. What on earth happened?!

If I were to have questions it would be, if Aphro is the Goddess of love for the entire world, then there are no other gods? Why just the Greek ones? They were not first. I love mythology so my head brain goes haywire.

Oh and then there is Khristos that says he will help her with her new powers. Hot single Khristos.

Learning to match people, guarding your heart from a hunk, and new quirky friends. That sums it up. A fun story

Mythology buff Quinn Morris has always wanted to visit Greece, where her inner hardcore romantic envisioned proposing to her boyfriend. And she's finally here--with her friend Ingrid. She might not have found love at the Parthenon, thanks to her cheating ex, but she has found big boobies...and swirly purple eyes...and sparkling skin. Oh, and Greek hottie Khristos, who claims to be descended from a goddess and swears Quinn's the new Aphrodite.

With help from Khristos, and support from Ingrid's employers--Nina, Wanda, and Marty--Quinn has to learn all the tricks of the matchmaking trade, STAT, lest she has her new friend Cupid sticking arrows in all the wrong places. All while dealing with her man-hating mother, guarding her own heart from Khristos, and protecting herself from an invisible foe who might want to snatch Quinn's newfound powers from her--dead or alive.

Not crazy about the cover. But this does sound interesting and fun!

Yeah it does nothing for me