Blodeuedd's Monday Review: Scot Under the Covers by Suzanne Enoch 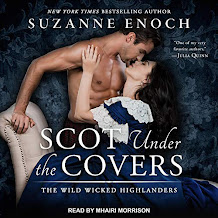 I enjoyed this one, and the baddie, omg you all, he was so evil. A psycho manipulative lying ahole. I wanted to push him into the Thames.

Aden needs a wife, and fast before his sister marries. Also, now in this book, yeah, not a fan of his sister's fiance. Maybe they should nip that in the bud.

Miranda is in trouble. Her brother has caused it and she sees no way out. This really had me on the edge of my seat for the last hour. How could she get out of it?! The baddie was just so evil and had thought of everything.

They meet and Aden tries to help her. And they were so perfect together, yes sure at first she thought he was a gambler and ahole, but she gets to know him and sees that there is more to him.

They were so fun together, and the drama so good and thrilling! I mean, dang that baddie!

I do prefer distinct voices so when this started I was not sure, because the only difference was male and female voices, and hardly that. But what saved it was that she had a wonderful voice, it was just so good that I forgot the whole everyone sounds pretty much the same thing, except those with accents.

Miranda Harris is known for her charm, wit, and ability to solve any problem she encounters. But when her brother lands neck-deep in gambling debt to a crafty villain and Miranda is subsequently blackmailed into marrying him, she must enlist the help of the devil himself to save the family honor―and herself.

Devilishly handsome Highlander Aden MacTaggert knows next to nothing about the ways of the ton, but he most certainly knows his way around gaming halls and womens’ hearts. Still, Aden is not sure how he’ll manage to find a Sassenach bride in time to save his family’s inheritance. When his almost sister-in-law Miranda comes to him for assistance, he proposes a partnership: She will help him navigate London society and he’ll teach her everything about wagering…and winning back her freedom. The beautiful, clever lass intrigues Aden―but is she playing her own game, or are the sparks between them real? He is accustomed to risking his pocket. But betting on Miranda’s love is a game he can’t afford to lose. . .

It's an author I really need to try

An evil villain can help make a story. Sounds like both hero and heroine are up the creek. I'll have to look this one up.

Melliane
Lots to choose from

Carole
He was the scum of the earth

Sophia
He is trouble, he is a menace