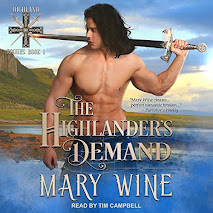 Maybe it is the times we live in, but I felt Rhedyn deserved better. I know it got good in the end, but if these times have thought me anything, you do not need toxic people around. You are much happier without them.

Buchanan thinks Rhedyn's dad was behind the death of Buchanan's half brother. So he takes Rhedyn to settle the score. Of course every asshole in the keep thinks she should be killed, like hello, what did she do? Where is the evidence against her dad? So Buchanan is always kind, I do not blame him, he thought he did the best thing cos he did not want to start a war. And he does look after her, but, omg everyone at the keep is horrid. I mean this book had me crying because they were so evil. And at the end everyone is forgiven, like no, I do not forgive you! Rhedyn was way too nice, I would have told them all to shove it and leave, even though Buchanan was a total hottie, and kind, just, the people! Though his sister was nice, and her champion

Oh I rambled, but hello, it made me cry cos they were so mean.

Love conquers everything, and mean people turn nice, and even evil people have happy endings (even though they totally do not deserve it). Only the baddest baddie got what he deserved.

I enjoyed it, but aye, it was sad too. But Mary Wine never disappoints me, her highlanders are always so fierce.

Male narrator! Oh he got me, great voices and a total feel for the story told . He made the accent thick so I had to listen and not stray as I sometimes do, which is a good thing then

Buchanan Mackenzie is a new laird, and he’s about to be tested. When his half-brother is killed, he must seek vengeance or face the rage of his clansmen. Beyond spilling blood, fate offers him another solution. Taking the daughter of his enemy will appease his angry men, but it leaves him struggling to find peace over making a hostage of a woman.

Rhedyn Lindsey has been raised to shoulder her duty. For her kin and clan, she will make the best of a future that will be decided based on alliances. But she never expects it to come in the form of being taken as a hostage.

In an instant, her life is turned inside out. Perhaps for the best, though, for the alternative would have been to see her father's blood spilled. Now she’s at the mercy of a man who has every reason to hate her. Regardless of what fate throws her way, she won’t crumble. She’ll stand up to Buchanan Mackenzie. Just because she’s a woman, doesn’t mean she lacks courage.

Will Buchanan Mackenzie give in to the demands of his men who seek revenge for the death of his half-brother, or will he rely on the wisdom his beloved father taught him, and take his time in deciding what will happen to his beautiful captive—Rhedyn Lindsey—a woman who has captured his attention, respect, and quite possibly his heart?

Melliane
She is fun

Carole
They were so mean, You do not need Toxic people around Raedan!

I'm more blood thirsty for mean people getting their comeuppance, too. I've read two books recently where I thought the heroine was way too kind.