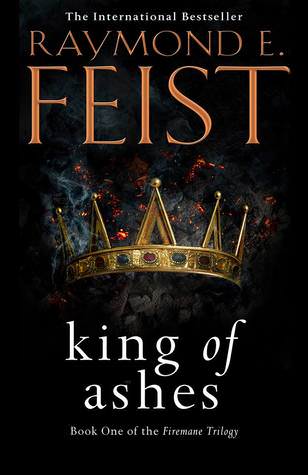 My thoughts
I think I am going to try to make non-review book reviews short...you know it goes faster that way ;)

So, was I disappointed? In a way. It did not feel like Feist. This really could have been by any other author out there. It was still a good book, but it did not have anything that wowed me. Or that screamed Feist.

It's about 4 kingdoms ganging up on one and killing everyone. Then 17 years later we have the prince who got away being trained by assassins. Hatu was rather bland to be honest. I want to see more life in him, but then he has be trained to be forgettable and so he is.

Another POV is Declan a young smith. Him I liked. He wanted to have his own smithy and start his life.

And then it ends. We know the players and...oh right, there is also The Church of the One. I am so over that. Can't the religion trying to crush everyone else be a polytheistic one for once.

Conclusion:
Good, but nothing great or amazing.

Blurb
For centuries, the five greatest kingdoms of North and South Tembria, twin continents on the world of Garn, have coexisted in peace. But the balance of power is destroyed when four of the kingdoms violate an ancient covenant and betray the fifth: Ithrace, the Kingdom of Flames, ruled by Steveren Langene, known as "the Firemane" for his brilliant red hair. As war engulfs the world, Ithrace is destroyed and the Greater Realms of Tembria are thrust into a dangerous struggle for supremacy.
As a Free Lord, Baron Daylon Dumarch owes allegiance to no king. When an abandoned infant is found hidden in Daylon’s pavilion, he realizes that the child must be the missing heir of the slain Steveren. The boy is valuable—and vulnerable. A cunning and patient man, Daylon decides to keep the baby’s existence secret, and sends him to be raised on the Island of Coaltachin, home of the so-called Kingdom of Night, where the powerful and lethal Nocusara, the "Hidden Warriors," legendary assassins and spies, are trained.

Years later, another orphan of mysterious provenance, a young man named Declan, earns his Masters rank as a weapons smith. Blessed with intelligence and skill, he unlocks the secret to forging King’s Steel, the apex of a weapon maker’s trade known by very few. Yet this precious knowledge is also deadly, and Declan is forced to leave his home to safeguard his life. Landing in Lord Daylon’s provinces, he hopes to start anew.

Soon, the two young men—an unknowing rightful heir to a throne and a brilliantly talented young swordsmith—will discover that their fates, and that of Garn, are entwined. The legendary, long-ago War of Betrayal has never truly ended . . . and they must discover the secret of who truly threatens their world.

Not familiar with the author and I'll be honest, I don't think this would be one for me either!

Lorna,
I do love his earlier stuff

Mel
I kept on comparing :/

Ah bummer that it was ho-hum for you after liking earlier stuff.