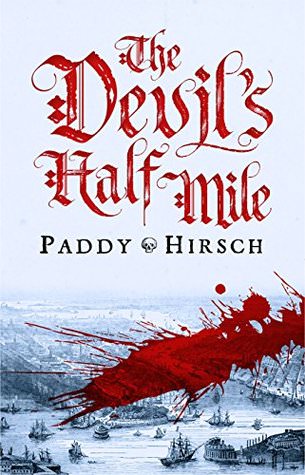 I have talked about it before, how I enjoyed a historical mystery. Because they have to work so much harder for it. There are no fancy labs or tech. There is legwork and asking the right and wrong questions that will probably land you in even more trouble. And I like that.

Justice is a young man who has been away studying law (and police work). Not to mention fighting the English in Ireland (bloody English!). And now he is back. An honest man, a good man. I liked him. He had a good head (and brain) on his shoulders. His uncle is a gangster and it would be so easy to become crooked, but he wants to make his own way.

This is a murder mystery on many levels. Like who killed his father many years ago? What was he dealing with? Is there something crooked on Wall street? (when isn't there). And not to mention as soon as he land he comes across men dragging up a murdered woman so what's the deal with that?  Slowly the pieces in the puzzle comes together, but it takes investigating and again, asking all those right and wrong questions.

And the bad guys wants to be in the clear.

There is also the story about him meeting his old friend, who is now a young woman and he does want to see that she is ok too. I will not tell to much there, you will see.

All in all, I do like a good mystery that is hard to crack. And I like how grey the book is. It's not easy in those times bringing people to justice (pun intended). There is danger and darkness in all that grey and the dark that is humanity.

I also felt like it could be a series...I wonder if he will do that. I'd like to see Justice solve a few more murders and hunt down a  few killers. He has this dark edge to him

Conclusion:
A historical thriller set in a New York I do not see often. Mystery, danger and a hunt for a killer.

Blurb:
New York, 1799: Justy Flanagan, lawyer, soldier, policeman, has returned to his native city, bloodied and battered after fighting in the Irish Rebellion against the English. Determined to hunt down the man who murdered his father, his inquiries lead him to Wall Street and the fledgling stock market there.

But as his investigations into the past move ahead, the horrific murders of young slave women in the present start to occupy his time. Convinced that there is a link between his father's murder, the deaths of the young women, and amassive fraud that nearly destroyed New York's economy, Justy can trust no one.

As the conspiracy deepens, it becomes clear that those involved will stop atnothing to keep their secrets. Justy is forced to choose: will he betray his father's memory, compromise his integrity, and risk the lives of his closest friends, to get to the bottom of a tale so dangerous, it could change the landscape of America forever?

yesss. I play around with the format all the time. It makes it refreshing to switch it up once in a while ;)