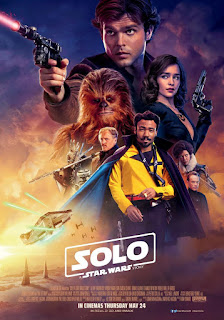 During an adventure into the criminal underworld, Han Solo meets his future copilot Chewbacca and encounters Lando Calrissian years before joining the Rebellion.

My thoughts:
I should have written this at once! Here I am, 3 days later. It's just the best time to write in peace is when SO is putting S to bed and I have barely had time to check blogs in that time these past few days. Sadly my initial reactions are gone, but I will try my best ;)

I did NOT have high expecations. After having watched the trailer all I thought was that Lando looked awesome! But I was pleasantely surprised!

Negative things:
Nope, Alden is NOT Han Solo. MIL was all omg he looked just like him and acted like him, ha! no he did not. I get that they can not find another Harrison Ford, but I just did not get the feeling that this was Han Solo...at all. It was just your run of the mill smuggler and that was still cool.

Q'ira...yeah, was she like only there for there to be a female? I did not care for her character and I did not sense any chemistry between them.

A person that shows up that made me go all wtf?!

Positive things
Omg you guys, Donald GLover killed as Lando. He WAS Lando. He looked like him, he nailed it.

L3 was the best character int his movie. Dang! Funny, awesome. My heroine.

THis other character that shows up totally needs a movie, just saying. Was not around a lot but stole the screen.

I ended up enjoying the story, and I would say it was better than the new ones. Except Rogue one which is the best Star Wars movie of the new ones. But yes I did like Solo better than the trilogy cos I am so not a Rey fan. And the movies are so Disney. While this one managed to be funny and dark. A win win.

I haven't watched this one

I forgot to sent a trailer! Ugh, sorry.

Melliane,
DO watch it :)