Saturday Movie Night: The Mountain Between Us (2017)

Hello everyone! This month Blodeuedd and I are reviewing, The Mountain Between Us.

Blodeuedd is in green and I am in purple. 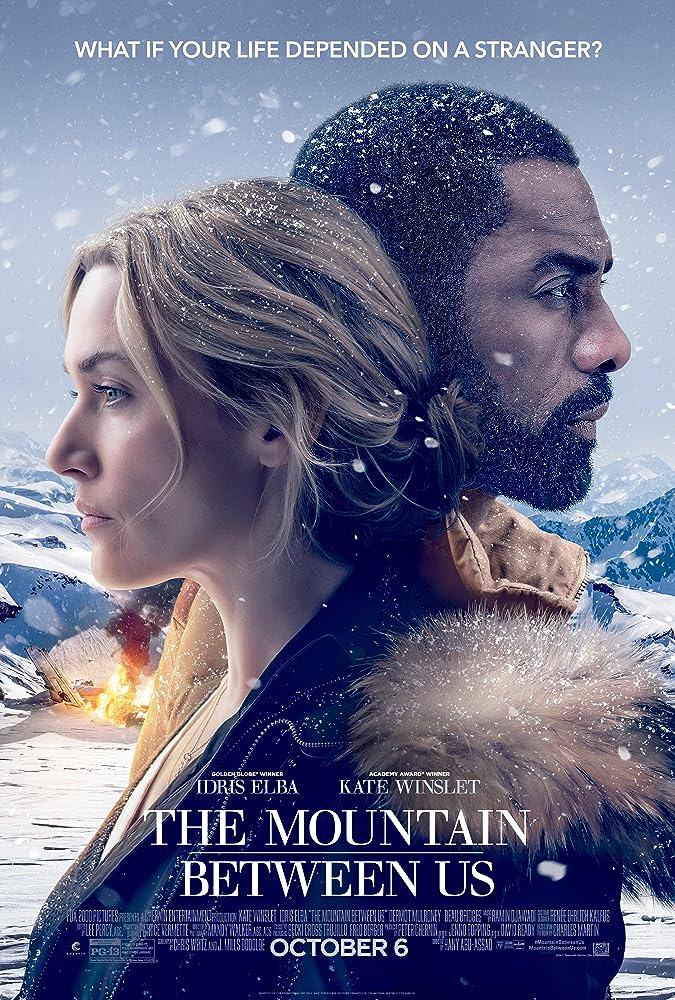 
Stranded after a tragic plane crash, two strangers must forge a connection to survive the extreme elements of a remote snow-covered mountain. When they realize help is not coming, they embark on a perilous journey across the wilderness.

Yess earlier than normal! But yes, I teared up for sure. I didn’t cry but I was yelling at the screen! I was so worried at the end there! I had no idea what was going to happen!

I was so worried! I was all NOOOOOOOOOOOOOOOOOOOOO. And then my heart broke. *coughs* But let us not talk about that anymore.
SO the movie was not awesome, but not bad, it was good, I watched it in a day and I was never bored since well...they were about to die anytime!

So hard not to give away spoilers. I agree. It was good. Not amazing, but I really did enjoy it. I was so worried. I wanted to punch him! Like don’t leave her alone. Haha she is a hot mess. Poor girl. That would SO be my luck tbh. Get a broken leg and be a hindrance on the whole thing.

AT least she wanted to move forward and try to save them. With a busted leg! But it was sure lucky she had a doctor with her ;) That is all I am saying.
There was this one time when they were walking and I was all, damn, have you two ever been in the woods!? I could see where they were and then boom, catastrophe.

Yes, she did luck out with the doctor. And he was lucky that she was a restless soul and wanted to push on. Sometimes you can’t do the logical thing. Mannnn they were not woodsy people AT all. I was surprised she wasn’t since she did a lot of photography in lots of different places in the world. Him? Not surprised at all. He is good at being a doctor and he is a London boy after all...so his skills are to be limited. I was in awe at what he was able to do.

True. I get that he did not know. But she should have or? What did she actually do? War zones? Nature photos? Did I miss it? Maybe she was not woodsy either.

I think she just went where they told her to go. Her last assignment was a nazi/skinhead thing. So she must’ve not been too woodsy herself. But still...did neither of them watch any shows about nature even in high school? Some basic things to make it easier to survive. They did well enough, but the one scene I wanted to scream at them. Like I could see that coming for sure. Good thing that dog was there! He saved their butts a lot.

Praised be the dog! Yes that is the one important thing to know. But they were tired and hungry. I know I have been a mess this year, I could not have walked in those woods either lol.

OH and that explains things about her, I tend to miss things sometimes when S is talking ;)
That is true. She was in a lot of pain and tired. Kuddos to her for doing all that on a broken leg. He made one heck of cast for her.

Dunno how she made it! Oh and the end, no spoilers, but omg I was all omg no no no, walk walk walk, omggggg.

Same! I was screaming! Poor girl!!! Poor guy!!!! WALK DARN YOU WALK! My puppy was even getting into it and barking at the screen. He did not appreciate that dog. He barked when he barked. LOL I loved that little dog. I felt bad for him too.

He did not like dog! How rude, Dog, was awesome :)

Very rude! LOL
I do wish there had been more emotion. It felt very dry for the situation they were in. They had some here and there, but I wanted her to freak out more when she found out. They seemed very calm. If it were me and BF? I would’ve been freaking out for about an hour screaming and throwing a fit. After that? I would be okay and already walking. They wasted so much time waiting and waiting.

Yes, I would have freaked too and screamed. More screaming please!!!!!!! You are on top of a freaking mountain! Please scream a bit and then start walking.

I can see him not showing as much emotion. 1) Doctor, so rational 2) Male, so prideful and 3) British, breed to show little emotion. So I get him being calm. Her? She is an American woman who is reckless and emotional and thinks with her gut and heart. She needed one good freak out especially when he told her the moment she woke up. 0_0 In pain and stranded?

Well, at least he could have gone all “Blimey, we are on top of a mountain. How surreal. What a jolly good laugh.”

LOLLL something. I mean...he did have a mini freakout when he almost fell off after 10 mins. >_> Not an outdoorsman AT all. But yes, besides that...I did enjoy their chemistry and how they worked together. It took time since they are two different people in all aspects. I’m glad they didn’t work well at first. Made it realistic.

So different! And just cos you are stranded does not mean you will click, so yes I liked that too. The chemistry felt real. And then it got more...we might die! And then end. And then, well I am happy about the end cos I was worried there.

Kuddos to the writers. They made the people feel real. They needed more of real reaction at the beginning, but I was good with their character development as the story went along. I so did not expect what happened with his wife. And I agree. I was happy with the ending overall. I wanted more tho….

Something, something more...I get that and I wanted that too. I cannot put my finger on it.
But overall I enjoyed it as it really was about life and death.

I did not like Mark at all. I agree there needed to be something. Something felt missing. Maybe more of an epilogue would’ve been nice.

It was a book right? Maybe there is something in it?

Yess it is a book. Never heard of it before. There might be more in there. Usually is the case.

I am reading reviews. Stuck in the mountains for weeks- He is a mountain climbing doc...yeah, it sounds different

Psh. Yeah - the writers of the film cut that out! Bloody guy almost fell OFF the mountain. LOLLL

Yup, eagle scout, had a backpack filled with supplies with him from his recent climb. Slept on his wife’s grave and reviewers call him a bit loony

0_0 I think I like this version better. He may have not been outdoorsy and he seemed to be a private fella, but I adored him.

I do think this was the better version ;) Definitely

Agreed, agreed. Prolly one of those rare times the movie is better. Lol! So, anything else to add? I’m trying to think of more non-spoilers...hard tho….

Too hard not to spoil things so...Good movie with slow moments.

Yes, a good movie. Not amazing but it was an interesting watch. It is hard to take your eyes off the screen even with the slow moments because goodness knows what is going to happen. The human spirit and the dog spirit is strong for sure. If these two knuckleheads can survive, I am sure I could...maybe...I would be a wimp about the broken leg thing.

It is a miracle they survived! And I am sure we would have made it, though without a doc it would have been hard.

Yesss, that would’ve been our downfall if it was us. I can fix cuts and bruises, but broken legs and ribs? Naw. Sorrrreeeee you might not survive if I had to be your doc!

Lol. Ok a new month is coming soon and we have another movie to pick :)

Oooo nooooo who’s turn? Who picked this one? I can hardly remember...we were proactive and picked early for May……..

Eeek okay. I’ll find something...not sure what. Until next time?

I just realised I still posted the wrong one, arghhhh

hahaha there was barely a difference between the two ;)

A funny discussion, thank you!

*bows* Pleased to make you laugh!