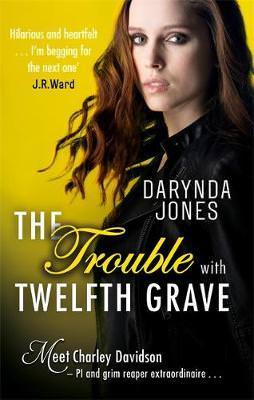 Ever since Reyes escaped from a hell dimension in which Charley accidently trapped him, the son of Satan has been brimstone-bent on destroying the world his heavenly Brother created. His volatile tendencies have put Charley in a bit of a pickle. But that’s not the only briny vegetable on her plate. While trying to domesticate the feral being that used to be her husband, she also has to deal with her everyday life of annoying all manner of beings—some corporeal, some not so much—as she struggles to right the wrongs of society. Only this time she’s not uncovering a murder. This time she’s covering one up.

Add to that her new occupation of keeping a startup PI venture—the indomitable mystery-solving team of Amber Kowalski and Quentin Rutherford—out of trouble and dealing with the Vatican’s inquiries into her beloved daughter, and Charley is on the brink of throwing in the towel and becoming a professional shopper. Or possibly a live mannequin. But when someone starts attacking humans who are sensitive to the supernatural world, Charley knows it’s time to let loose her razor sharp claws. Then again, her number one suspect is the dark entity she’s loved for centuries. So the question becomes, can she tame the unruly beast before it destroys everything she’s worked so hard to protect?

My thoughts:
I honestly do not know if some of those previous ones deserved my ratings, I mean that filler book was so dull. And I have to face the truth here.

Nothing happens.
It was rather dull.
Not even sexy Reyes wowed me.
The books are stagnating.

The truth is I am glad the next will be the last. I fear I have felt like this at times during the last few books, but this was the first where I felt it all way through.

It was sadly only ok.
Written By Carole Rae at 7:44 PM

SOme series just start to draaaaaaaaaag

one more book and it's the end