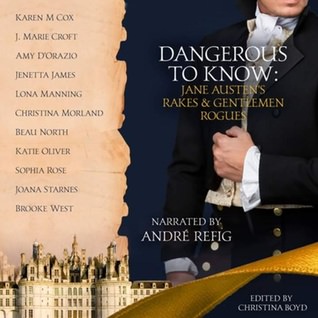 "One has all the goodness, and the other all the appearance of it." —Jane Austen

Jane Austen’s masterpieces are littered with unsuitable gentlemen—Willoughby, Wickham, Churchill, Crawford, Tilney, Elliot, et al.—adding color and depth to her plots but often barely sketched. Have you never wondered about the pasts of her rakes, rattles, and gentlemen rogues? Surely, there's more than one side to their stories.

It is a universal truth, we are captivated by smoldering looks, daring charms ... a happy-go-lucky, cool confidence. All the while, our loyal confidants are shouting on deaf ears, “He is a cad—a brute—all wrong!” But is that not how tender hearts are broken...by loving the undeserving? How did they become the men Jane Austen created?

My thoughts
And here come the tales of all those rakes and rogues you find in Austen. Some that I like, some that I detest and some that are fun to hate.

“Willoughby’s Crossroads” (John Willoughby, Sense and Sensibility) by Joana Starnes
Oh Willoughby, I so saw you there and then you went and made a mess of things. It is a look at what happened before he ever met Marianne, and the choices he made.

“A Wicked Game” (George Wickham, Pride and Prejudice) by Katie Oliver
I actually liked Wickham! He was just a young fool, who later in life made so many mistakes. Poor guy. And then he married Lydia in the end, I mean poor guy will pay for that his entire life.

“Fitzwilliam’s Folly” (Colonel Fitzwilliam, Pride and Prejudice) by Beau North;
Fitzwilliam has a bit of a rep with the ladies, but he is an honorable rake, and here he meets his match

“The Address of a Frenchwoman” (Thomas Bertram, Mansfield Park) by Lona Manning;
MP is the one I have seen the least, or read. I really can not recall anything of Thomas, but I liked how he was here and how he fell in love.

“Last Letter to Mansfield” (Henry Crawford, Mansfield Park) by Brooke West;
Oh Henry, you dug your own grave. I still liked him

“An Honest Man” (Frank Churchill, Emma) by Karen M Cox;
Nope, I will never like Frank. It was not a good thing he did, and here we see how he and Jane fell in love, or lust.

“One Fair Claim” (Sir Walter Elliot, Persuasion) by Christina Morland;
Oh he was such a pompous fool!

“The Lost Chapter in the Life of William Elliot” (William Elliot, Persuasion) by Jenetta James;
I found myself liking him as he fell in love and I felt sorry for him

“As Much as He Can” (General Tilney, Northanger Abbey) by Sophia Rose;
Yes, NA is another one that I do not know that well, but I take it from this that the General was not a good guy ;) But here, awww, I get man, I get it

“The Art of Sinking” (John Thorpe, Northanger Abbey) by J. Marie Croft;
Well this guy is just an idiot. Interesting to hear about, but what a rogue! You had it coming

“For Mischief’s Sake” (Captain Frederick Tilney, Northanger Abbey) by Amy D’Orazio
.THis even had me snorting. At first I was not sure what to make of him, but I guess I get it in a way, and then when he finds love. All is forgiven.

Conclusion:
All these rakes and rogues. Some I can not forgive, some are shown in such a good new light here, that I am inclined to forgive them. But they are all interesting to hear about. What made them into rakes and how it shaped their lives.

Narrator Andre Refig
I like his rake voice ;) They sound so very snobbish at times (in a good way) cos it is just so fitting.
Written By Carole Rae at 6:00 PM

Honestly why am I so obsessed with JA!? They are just SO fun