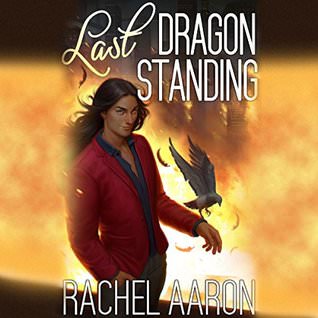 There is no way to write a blurb for this final book without spoiling all of the others. Suffice it to say, mysteries resolve, dragons war, pigeons abound, and Julius must risk himself in ways he never dreamed possible as Bob’s grand plan finally comes to fruition.

But the Great Seer of the Heartstrikers isn’t the only one whose schemes are nearing completion. The Nameless End is coming, and even the machinations of the world’s most brilliant dragon seer might not be enough to stop it. As the world comes crashing down, it’s up Julius to prove what he’s always known: that seers can be wrong, and Nice Dragons don’t always finish last.

My thoughts:'
I know my other reviews have basically been Squee Squee Squee, but this time I feel so empty. So
sad.

My poor heart, my poor heart. No more Julius *sniff* No more Crazy Bob and his weird pigeon (thinking of Tesla, maybe they should marry) No more Chelsea and her Golden emperor. No more Fredrerick who I really started to like. You are awesome! *sobs* No more Justin who is just too much! Awww, Justin, you silly knucklehead.

The epilogue left me hoping, because she does leave an opening if she wants to go back and explore this world, but with new characters (and hopefully old ones coming in and saying hi).
That would be fantastic!

Random thought. How on earth!? did his mum get all those dragons to mate with her. Omg she is such a bitch, sure a conniving pretty bitch, but still. She is a piece of work.

As for the book. The big fight is on! Down with the Leviathan! Save the world!

But who cares! I am finished now. It is over! *Cries* I need more Julius and Marci! Moooooore
*ugly cries*

Nooooooooo!
Not the end, not THE END!

Alas, all awesome things must come to an end.
Written By Carole Rae at 6:00 PM

I realised I never check back, booo me

ends are so sad

Mel
AYE they are