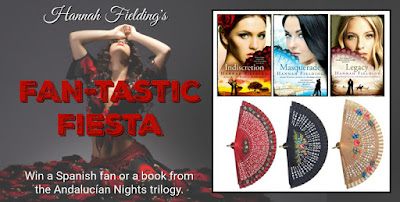 The award-winning epic Andalucían Nights Trilogy sweeps the reader from the wild landscapes of Spain in the 1950s, through a history of dangerous liaisons and revenge dramas, to a modern world of undercover missions and buried secrets. Romantic, exotic and deeply compelling, and featuring a memorable cast of characters, including a passionate young gypsy, a troubled young writer and an estranged family, The Andalucían Nights Trilogy is a romantic treat waiting to be discovered.
Buy link: https://www.amazon.com/Andalucian-Nights-Trilogy-Award-winning-Romantic-ebook/dp/B06XKZ2XKC/

Hannah Fielding is an incurable romantic. The seeds for her writing career were sown in early childhood, spent in Egypt, when she came to an agreement with her governess Zula: for each fairy story Zula told, Hannah would invent and relate one of her own. Years later – following a degree in French literature, several years of travelling in Europe, falling in love with an Englishman, the arrival of two beautiful children and a career in property development – Hannah decided after so many years of yearning to write that the time was now. Today, she lives the dream: writing full time at her homes in Kent, England, and the South of France, where she dreams up romances overlooking breath-taking views of the Mediterranean.
Hannah is a multi-award-winning novelist, and to date she has published five novels: Burning Embers, ‘romance like Hollywood used to make’, set in Kenya; The Echoes of Love, ‘an epic love story that is beautifully told’, set in Italy; and the Andalusian Nights Trilogy – Indiscretion, Masquerade and Legacy – her fieriest novels yet, set in sunny, sultry Spain.

a Rafflecopter giveaway
Written By Carole Rae at 8:28 PM

I do not own a fan, saaad