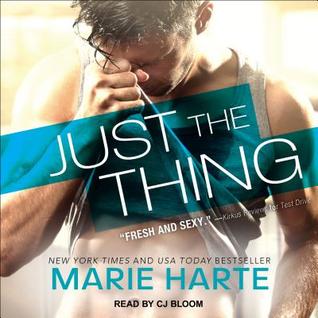 Gavin Donnigan left the Marine Corps a shell of a man, hounded by guilt for deaths he couldn't prevent. But teaching a self-defense class at the local gym brings some stability to his life-along with a gorgeous leggy blonde who won't give him the time of day. Zoe York lost her twin sister to a freak car accident a few months ago. She's been struggling to bury her grief, but it isn't until she signs up for a self-defense class with its distractingly hot instructor that she begins to come out of her shell again. With the memory of her sister telling her to live a little, Zoe decides a fling with buns-of-steel Gavin Donnigan might be just the thing. Soon they're sparring both in and out of the gym. And for the first time in a long time, each is looking forward to tomorrow.

My thoughts:
I have read about heroes with issues but Gavin sure suffered. He had PTSD and he cried. He cried! Those issues guys have a chip on their shoulders but they never cry. This felt real. He felt broken. He had spent 14 years in the marines and now he worked as a trainer. He tried to keep a smile on his face, but the guy was yes, broken.

Zoe is broken too. But not near as much. She is dealing with the loss of her sister. And this thing does bring them together. They both lost loved ones. They both grieve.

And there was a lot of smexy times. Like a lot. Like a bit too many for my taste as you know I skim things. But hey that does not bother me, I just go past it and get to the grieving, issues and romance stuff. But for those of you who like it, well there is plenty to go around.

I liked Gavin because he was so vulnerable. Zoe was the stronger one here and I liked to see them get closer and really have to work for it.

Narrator: CJ Bloom
She did a good job, but her men sure sounds macho. But then they are macho so that makes sense.
All in all a good narration.

I'm glad that Zoe was the strong one in this one.

That sure made it different