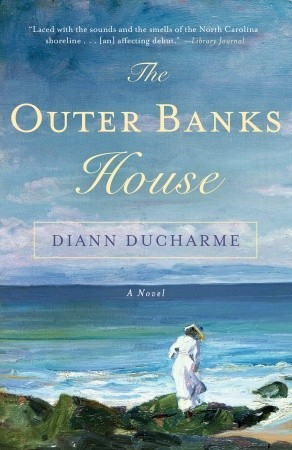 Author: Diann Ducharme
Title: The Outer Banks House
Genre: Historical Fiction & Romance
Pages: 290
First Published: 2010
Where I Got It: My shelf (Given to me by the author/publisher for my honest and unbiased opinion)

As the wounds of the Civil War are just beginning to heal, one fateful summer would forever alter the course of a young girl’s life. In 1868, on the barren shores of post-war Outer Banks North Carolina, the once wealthy Sinclair family moves for the summer to one of the first cottages on the ocean side of the resort village of Nags Head. Seventeen-year-old Abigail is beautiful, book-smart, but sheltered by her plantation life and hemmed-in by her emotionally distant family. To make good use of time, she is encouraged by her family to teach her father’s fishing guide, the good-natured but penniless Benjamin Whimble, how to read and write. And in a twist of fate unforeseen by anyone around them, there on the porch of the cottage, the two come to love each other deeply, and to understand each other in a way that no one else does. But when, against everything he claims to represent, Ben becomes entangled in Abby's father's Ku Klux Klan work, the terrible tragedy and surprising revelations that one hot Outer Banks night brings forth threaten to tear them apart forever. With vivid historical detail and stunning emotional resonance, Diann Ducharme recounts a dramatic story of love, loss, and coming of age at a singular and rapidly changing time in one of America’s most beautiful and storied communities.


Wow. I am speechless.
First I want to say that this is much more then a romance, there is so much more at play. The author certainly did capture the time period. The American Civil War just ended the year before. The slaves are free and have rights now. However, the South is falling to shambles. Plantations and businesses are failing. There is still hatred and racism flowing; the Klu Klux clan has been born. It's a tense word for sure.
In the midst of this is Abby and her family. For some odd reason, Mr Sinclair built a house on the shore of North Carolina. It seems silly to spend that money since their planation is falling apart since their slaves and Uncle Jack died in the war. There are not enough hands to tend the fields. So I find it strange to build a house for the summer....such a waste of money and time in my opinion.
I liked Abby a lot and I liked Ben as well even though he was unkept and smelly. It took a long time for them to fall in love, which I am grateful for, because this certaily was unlikely match. Why? Well, Abby is a rich plantation owner's daughter, while Ben is poor, uneducated fisherman who is helping her daddy out with fishing and touring the area. Very unlikely match, but it was nice.
While Abby is teaching Ben to read and write, something dark is brewing. You can feel it the whole time. Certainly unsettling, but it did add to the story. It took a long, LONG time for the drama to hit its climax. I felt the ending was a little rushed compared to the rest of the book. I think she should have lengthened the book a little bit or cut off some scenes not needed. I hope there is a sequel! Which will be nice, because I must know what happens! Yes, yes, a cliffhanger. However, the cliff-hanger wasn't too cliff-hangerish, because you could stop there and think everything worked out. I am hoping for a HEA! It seems to be so, but then you must read on to truly know.
Am I bad? I was kinda rooting for Hector for the majorty of the book until he had a tantrum at one point and said some nasty things. Nope. All pity and rooting gone for you. A secret part of me was wishing that he would end up with Eliza. hahahahaha now THAT would be an unlikely match.
I will stop now before I give off some spoilers.


I really, really liked this book. It was such a wonderful adventure. So dark, so full of hope. I am glad that the author picked this time period, because this certainly was a tense and strained part in America's history. Even though Abby and Ben have an unlikely love story, I rooted for them! The ending left me wanting more. I NEED to know what happens next. I recommend this for everyone who likes historical fiction mixed with a touch of romance (not over-the-top romance, a nice blend). Out of five stars, I stamp this with 5 stars. It was certainly good even though I wanted it to last longer ;)

Oh you got me at 'dark' and 'adventure'. I think I would love to read this one. And the cover is very nice indeed!

I do wonder what happens there