Blodeuedd Reviews: The Golem and the Djinni by Helene Wecker 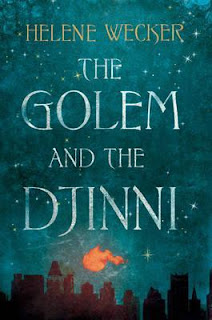 Blurb:
Chava is a golem, a creature made of clay, brought to life by a strange man who dabbles in dark Kabbalistic magic. Ahmad is a jinni, a being of fire, born in the ancient Syrian Desert. Trapped in an old copper flask by a Bedouin wizard centuries ago, he is released accidentally by a tinsmith in a Lower Manhattan shop.
Struggling to make their way in 1899 New York, the Golem and the Jinni try to fit in with their immigrant neighbors while masking their true selves. Meeting by chance, they become unlikely friends whose tenuous attachment challenges their opposing natures, until the night a terrifying incident drives them back into their separate worlds. But a powerful menace will soon bring the Golem and the Jinni together again, threatening their existence and forcing them to make a fateful choice.
Marvelous and compulsively readable, The Golem and the Jinni weaves strands of folk mythology, historical fiction, and magical fable into a wondrously inventive and unforgettable tale.


My thoughts:
For me it felt like one of those more quiet books. It was a sort of folktale told, it was sweet, sad and made you wonder....
A man goes to a rabbi and tells him to make him a wife. And the rabbi makes a Golem, the best one ever made. Then Chava is brought to New York.
"Ahmad" is a djinni, free and curious. Until the day a wizard captures him and he awakes a thousand years later in New York.
They are both lost, not human, and trying to find their way. Trying to act as human as they can. To figure out what life really is. They will eventually meet and for a moment feel like they are not alone in the world.
I liked how the book was real, but at the same time, maybe there used to be Djinni, maybe there still are, but they have learned to be hidden. Maybe a rabbi of the old really could create a golem. So it works.
I already said it felt quiet, and it did. The pace was, ok not slow, but not fast. Stuff did not need to happen, we could just go with the flow, experience thing. It was the way this story had to be told and it worked splendidly that way.
Interesting and beautifully told.

Email ThisBlogThis!Share to TwitterShare to FacebookShare to Pinterest
Labels: B's Mondays, Blodeuedd, Books and Reviews, Helene Wecker, The Gollum and the Djinni

It sounds like an interesting one. It's the first time I hear about it.

I WANT this one.