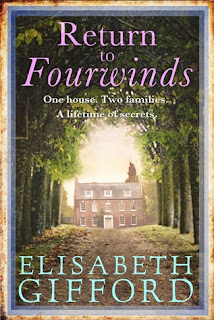 Blurb:
At Fourwinds they gather: Alice and Ralph, Patricia and Peter, to celebrate the marriage of their children. The marquee is on the lawn, breathing in and out in the summer heat. But the bride is nowhere to be seen.


As both families are drawn together, the past floods through the corridors of the old house. What secret has Ralph been keeping from his wife? What is it about Alice's wartime encounter with Peter that has haunted her ever since? And what could have caused Sarah to vanish without a word to any of the people she loves?


Moving from the orange groves of Valencia and the spacious houses of the British countryside to the post-war slums in the north, Return to Fourwinds is a sweeping, lyrical story of the things we tell and the things we keep to ourselves. Is Sarah's disappearance a culmination of the pressures that have kept the two families apart? Or can they work together to bring her back to Fourwinds?


My thoughts:
As for big secrets, yeah, I would not say they were big. People were just stupid. Everything had to be perfect, to look perfect, and if something was the slightest off, not good. They came from that era so it was understandable.
The book starts with Nicky and Sarah about to get married. She runs away and we go back in time.
Alice who grew up privileged, but not privileged enough for some so she strive for perfection.
Ralph her husband grew up in Spain. His story is the one of his mother and her new husband and the secrets there.

Then we have Patricia and Peter. Patricia does not really have a secret, and neither does Peter. But Peter grew up in the slums and wanted to make something for himself. He also knows Alice from the war. Ok so that secret was not really something she should feel bad about.
Their life before the war, and during the war, and after it. Lives were shaped. But I must say, Sarah's choice had nothing to do with those secrets. I'd rather have it as an aftermath of all of that. She still had a secret and I will say nothing more than I totally understood why she ran.
I liked what we later learned about Spain, now there was a book. I also liked the social clashes. Rich and poor. Newly rich. They all looked down on someone else.


For review
Written By Carole Rae at 8:43 PM

It's too bad about the secrets...