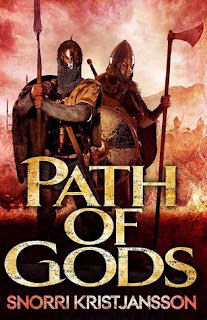 Blurb:
Reunited, Audun and Ulfar have a new sense of purpose: to ensure that the North remains in the hands of those who hold with the old gods. To do this, they must defeat the people who seek to destroy all they have ever known with the new White Christ. But these are powerful enemies and if they have any chance of victory, they must find equally powerful allies.
In Trondheim, King Olav, self-appointed champion of the White Christ, finds that keeping the peace is a much harder test of his faith than winning the war. With his garrison halved and local chieftains at his table who wish him nothing but ill, the king must decide how and where to spread the word of his god.
And in the North, touched by the trickster god, something old, malevolent and very, very angry stirs…


My thoughts:
I think this one was the best of the series. I read it in a day, it felt so light. Just like it should. Many historical books put in useless facts that drags down the book. Here he balanced it well, I felt like I was there, and then he mixed it with mythology and made it believable.
Audun and Ulfar are back together. They are still immortal, and they know that things are happening. A big showdown is coming.
First we have King Olav, arghh he made me so mad! So raping women who do not believe in Christ is ok. You are going down Olav, you and your religion! I kept waiting for ships to sail...if you catch my meaning... *whistles*
But then we have the dark evil parts. Loki has a willing pawn who wants to start Ragnarrök. And that is not really ok. There is a lot of darkness going on there. You are going down Loki!
As you can see our two heroes who are not really heroes, just men, have their job cut out for them. Armies are marching. Trolls are coming. Loki is laughing and the Gods are watching.
I used to read a lot of his fic set around this time, but ever since I started reading in English not so much. A shame really, it's always interesting. It's fun, and this book is a mix of fiction and mythology. A great mix that works.


For review
Written By Carole Rae at 7:00 AM

And you are late missy!

Oh Loki, my dearest, do start your Ragnarrök, I don't particularly mind ;p.

It sounds good mainly if the mix was well done. Glad you went back to something you enjoyed