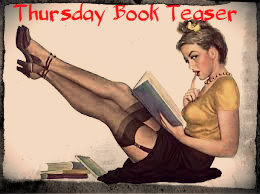 Thursday Book Teaser is a Carole-version of all the other book teaser memes out there. Every Thursday, I'll share a little tease of a book I'm currently reading. I'll randomly pick a page or I'll give some random number and flip to that page. I'll just share a few sentences to try and tease you. Anyone can join in! Just remember ...no spoilers! By the way this picture I found on Google and edited it myself.

Happy Thursday! How is everyone doing? I'm doing...eh....I just found out I was denied my unemployment money because I go to school full time so it is "impossible to work full time at the same time". It's bull crap, but lucky for me I went to Michigan Works and they are helping me appeal it.

They helped me write an appeal letter and then they wrote me a waiver, so if the government decides to have mercy upon me they will not only just give me unemployment money, but they'll give me a few extra bucks to go to school too. *fingers crossed* That would be nice. ^.^ I'm still looking for work like a mad woman...Tuesday I had put out 6 applications within two hours. That's right I'm a boss. Hahaha. In all I've had two interviews and they both promised me a second interview and no one has called me yet. Gah. Life really blows....but I'm trying to stay positive.

Enough of my sad tale, shall I tease you all with a snipbit from a book?

This weeks teaser comes from The Lover Spy by Kiana Davenport.

To continue with my story…We fought hard at Kernstown in Shenandoah Valley. Ah, but even so, they bested us. Speed of our defeat astounding, hundreds our soldiers turn and ran. Now prisoners, we are dead weary, dog hungry. Much death before and after dark.

Still I slaughter many enemy, make many children orphans. For this my dreams are haunted. In battle I run over dead like logs. Run over many faces. White, red, even Russian, French. See many hundreds stomachs burst. Strange skins of many hues, but intestines all same color!…”Now and then, while Johnny writes, he pauses, searching for a word.“We die for clean water. Here is only sewage. So, are forced to drink our ruin. At first men turn away, disgusted. I tell them is old Chinese custom in famine and drought. They watch silent when I drink my ruin. When I not die, they drink their ruin too.

Most uncomfortable news. Chinese boy from Kentucky in our brigade, caught as spy for Rebels. Soldiers pour gasoline down his throat, then light match and stick up nose. He explode, float down in little rags. Even so, I wonder, would they do such thing to Rebel spy with white skin?…”He stops writing and flexes his hand, softly repeating what he has written, trying to memorize each word. Then he begins the hard part—deleting in his mind what is not essential. He scribbles in his palm again, frowning with concentration.“How I will remember everything? Am living so many lives my brain become a stone sinking to forgetful depths. Will you believe such tales I write? Will our daughter? Is fitting for young girl to know such things?…”His daughter is sixteen now, or eighteen. The war has done strange things to his mind. Is she still beautiful? he wonders. Does she still have special love for books? And does she read to Raindance?He moans softly, recalling his wife’s scent, honeysuckle, wildcat hide, the glow of her copper-colored breasts. Then he returns to his writing, fingernail busy scratching at his palm, practicing words whose spelling gives him trouble. Urine. Ruin.

***
Captain Jenson from his regiment approaches, a young man so weary and gaunt his head seems too large for his frame. “How are you keeping, Private Tom?”Johnny jumps to his feet and salutes. “OK, sir! Everything OK.”“At ease, man. I want to commend you for keeping up morale, cheering the boys with your stories. And I don’t want you thinking on that Chinese boy, Elijah Low. He was a spy and got what he deserved.”He straightens up, tightening a filthy bandage made into an arm-sling. “I’ve watched you on the battlefield. You’re one of the bravest men in our regiment. I’m proud to have you serving under me.”Embarrassed, Johnny nods repeatedly and smiles.Jenson hesitates, then offers something hidden in his fist. “Take it. I’m tired of seeing you whittle with that hunk of stone.”Johnny stares at a small, bone-handled object with a button at one end. When he presses it, the blade snaps out like a small, slender fish caught in a sheaf of sunlight. He strokes the blade, remembering a similar knife he had given his daughter because it was delicate like her. He folds the blade and slips the knife into his shoe.For weeks, he spies on the captain while he forages for roots with other prisoners, and while he lectures them to keep their courage up. He spies on Jenson when he defecates, and squats beside him while he sleeps, feeling forever attached to this young man because he has given Johnny something infinitely more precious than a knife: the faint hope of acceptance, of acknowledgment that he is human and brave, and therefore significant. He has observed the confidence of Americans: that of accepting their lives completely, never wishing they were anyone else, or that they were born anywhere else, or raised in any other way. Just now, they may be wounded and starving, but they are secure in a way a Chinese could never be. Captain Jenson’s pride in Johnny fills him with confidence, the sense that he is becoming more like them, that he is becoming, incontrovertibly, one of them. And so his spirits lift.He presses on through months of near starvation, of whippings by prison guards, of gangrene and typhus that take more than half the prisoners. He presses on because he believes this time will pass. America is so large and generous it will never abandon or betray him. He has offered up his life for it, and one day it will reward him by welcoming him as a citizen. He moves through each day with burgeoning pride, almost with arrogance, as if his feet had turned to dragon claws.But on the day of his release, lined up with fellow prisoners awaiting the exchange, Johnny sees crows darting overhead in a floating and shifting calligraphy. Hearing their garrulous and raucous cries, he looks up again and sees they have formed the Chinese character for death."

*fingers crossed for you*

Good luck with the appeal I hope you get it all sorted out!

I don't think I've heard of this book before it sounds pretty neat! Great post!!

Thanks! I had to do another appeal today. Now they're trying to say that I purposely got myself fired. Meh.

Its really good so far!