Yes, I know that Dottie didn't post a picture this week, but we talked and came up with a good idea. On weeks she can't post a picture then its a "free-for-all" where we can use pictures from the past that we missed. I happened to be scrolling some of the past pictures and I stumbled upon this. I couldn't help but want to write for this picture.

The moment I seen this picture, I KNEW I had to write a story to go along with it. Yes, it's early Sunday and I'm a couple day late, but oh well. ^.^ I have been working on this since Friday. I just now I got done with it, I had to cut a lot of it because it was WAY too long for a short story. Hahaha.

Here's the past stories that go before this: 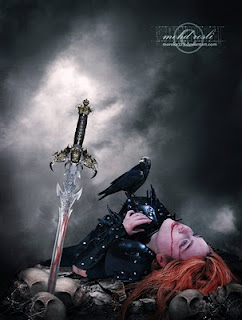 The Chosen Queen
by: CaroleRae

Edgar held onto his first and new baby; his peanut. He smiled down at the child and brushed back her redder than fire hair He whispered so as not to wake up Rayley, “You are special, my little peanut. You are the Chosen One they say.” The little baby cooed and Edgar swore she smiled at him.

Softly Rayley reprimanded, “You must let her sleep and not hold her so much, Edgar.”

He chuckled and kissed the little baby on her golden head, “Oh I know, but I do love her so.” He stood and gently put the baby back in her cradle, “Sleep my little Anabel.”

“What do you mean I can't go!” My voice rang around the room.

“I said is what I mean Anabel. You can not fight.” Mother snipped.

I wanted to tear my hair out of my head, “King Father, Queen Mother the men they need me to lead them! Elizabeth and Anne are way too young! King Father you are too much in pain to lead them because of your leg from the last war. Please. Please let me do my part.”

Mother went to say something, but father waved her to be silent, “My dearest girl. If you are to gave the blood oath and take the throne then you can not go into battle until you have a child yourself. Seeing that you refuse any suitor that comes your way, I don't see a child anywhere in the near future, so you can not go. This is my final word.”

There was nothing else I could say, so I turned on my heels and left the room with pride. I would not beg. They didn't understand. This would be the first war without a member of the royal family leading the way. Not only did I train with them, but I grew up with the majority of them. They need me. King Montresor II and his army are a force to be reckoned with and they need a strong leader.

I didn't stop my mad stomping until I reached my room and slammed the door behind me. Slamming the door oddly made me feel better. I groaned and walked to my window and watched the training down below. Hopefully this war would end the 200 year war with Amontillado. Perhaps with my help I could help end this war once and for all; they did call me the Chosen One. “This must be my destiny then!”

“What is your destiny?” A small voice asked behind me.

I turned and standing there was Elizabeth and Anne looking dark and lovely like everyone else in our family. Anne was eight years my senior and Elizabeth was ten. The would surely grow up to be great beauties like my mother. Anne is not warrior material, but Elizabeth was follow my steps and want to lead an army of her very own.

I love them so, but I do grow envious of their apparent beauty. They both have the traditional black hair, whilst I have red hair. Father had told me the red hair had come from my great-great-great-great grandmother who came from the land of Amontillado Even though it made me stand out and I have been deemed the Chosen One, but for some reason the red hair made me feel....different and not part of the family.

With a smile I asked, “Can you keep a secret?” They nodded with excitement, “I'm going to go to war and lead the army to victory!”

“Charge!” I hollered and the war cry sounded around me like a chorus. My men and I charged forward. At the same time the other army came at us. We met in the middle with a clash. Screams echoed and made my ears ring, but I swung my sword and ended the lives of two men who charged me. Blood splattered on my black armor and dripped harshly from my sword down to my arm. I looked down at the carnage I had just created for a brief moment. No matter how many battles I fight in I can not get the faces of the ones I have killed. However, the thought that I do this for my country gives me some comfort.

“Anabel!” A voice rings out my name. I turn and see my beloved friend Leo, grandson of the late Councilor Iago, surrounded by three fearsome Amontillado warriors. I push my way to him and help him take down the warriors quickly. With a smile, “Thanks.”

I nod and wink, “You owe me.” Again I turn and find myself locked in battle with a tall Amontillado warrior. With quick flick of my wrist I strike him down. He looks up at me and smiles, “It was an honor to die at the hands of the future queen.” Then he falls face-down on the blood soaked Earth.

“My brother!”A man cries and before I can react a sword cuts into my shoulder. I fall to my knees in a soundless scream. He kicks me to my back and I lay there staring up at the cloudy sky. All the sounds of battle seem to drain away and I feel alone. I try to move, but the pain keeps me still. The coppery taste of blood drips forms in my mouth. Spitting it up I groan, “Thats disgusting.”

“Retreat!” I hear called out by my general. The vibrations on the ground stand as evidence of my army running and retreating. Without much time, there is an eery silence. Why have they left me? Do they not know I am wounded? A tear drops down my cheek. I can not believe they leave me to death...or worse being a prisoner of war. More tears drop down my face.

“Do not cry my dearest.” A soft woman voice murmurs.

I look around trying to find the keeper of the voice, but all I see are the skulls of those I have killed and one single raven. The raven hops towards me and jumps on my wounded shoulder, “Be gone!” I try shooing it away, but it stays.

“You are the Chosen One, my little namesake.” Whispered the raven, “Do not give up.”

“This is your destiny.” I would swear that the raven smiled at me, “my beloved granddaughter.”

“Be gone you nasty vermin!” A deep voice pushes the raven away. Quickly it vanishes and I feel a part of me depart with it.

The man who had rid of the raven kneels down and touches my cheek, “You must be Princess Anabel. You fought bravely, but you need more focus.”

I looked up at him. His hair is cropped very short, but seems it would be a brilliant blond color if he let it grow out. I would admit, he was a very good looking me, but what captivated me most was his bright and brilliant blue eyes. They shined with such kindness and, was it,....awe? With as much hatred as I could muster I asked, “Who are you?”

If I thought his eyes were brilliant, his smile out-shined everything else, “I'm King Montresor II my dear.” He wiped the blood off my cheek. Black spots danced in front of my eyes and I could barely focus on his face. Before I was lost to the blackness, I heard him order, “Take Princess Anabel to my castle! Then bring out the wine and let us celebrate this victory!”

Oh great you did use the picture! Wonderful story!! :D

Yeah! This picture screamed at me, so I had to use it! Thanks Melissa!