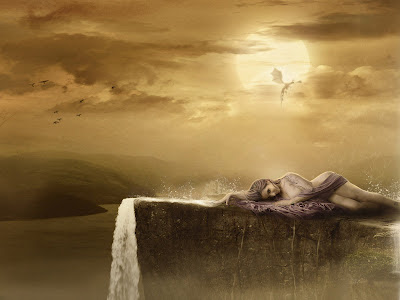 Watatsumi and the Princess
by: Carole Rae

Princess Alexandria awoke with a start. Where am I? Rubbing her the back of her head she felt a lump beginning to form and dried blood intertwined with her hair. Son of a bitch! She couldn't believe that the villagers and even her own family had succumbed to that “prophet” and his lying tongue. His words echoed in her mind, “A dragon this way comes and the eldest princess must be given to it or it shall consume the entire kingdom!”

Dragons hadn't even been seen in over a century, so this “prophecy” was completely ludicrous. At least that's what her belief was. Perhaps her beliefs were biased as to she was the eldest princess out of her sisters. She sighed and heaved herself up to a sitting position, “Are you kidding me?” They left her half naked with a fresh new tattoo running down her arm as a message to the dragon telling it that she was the sacrifice they were giving. With a growl she stood up and looked around her. They had even left her on the Waterfall of Wisdom, which happened to be the highest point in the entire kingdom, to make sure the dragon actually saw her.

Kicking a rock down the Waterfall of Wisdom, she grumbled, “I can NOT believe this happening to me! When I get my hands on you 'Prophet' I'll kill y--” She was cut off by a roar in the distance, “Great.” Turning Alexandria looked and seen the outline of a dragon hovering near the setting sun.

With another roar the dragon began to advance on her. She paled and tightened the loose pink material around her. This was real. The prophecy was real! The Prophet was telling the truth! This was going to be the end! At least the safety of her kingdom will be because of her. That thought comforted her. With a contented smile she closed her eyes and waited for the moment the roaring dragon would take her life and leave her people be. However, the moment seemed to last forever. She strained her ears, but she couldn't hear the roaring or the wings swooping. Slowly, she opened her eyes and looked to the sky. The dragon was gone! The surging hope inside of her was drowned out by a dark and sensual voice, “Much lovelier than I expected.”

Alexandria's smile disappeared as she spotted the keeper of the voice a few feet in front of her. His looks were those she didn't recognize but for some reason her blood boiled and her eyes couldn't leave his form. His hair was as dark as night and piled a top his head. His eyes, perhaps small and slanted, were deep and entrancing and at this point filled with lust. Trying her best, she hide any of her emotions as she asked, “Who are you?”

He snickered, “The evil dragon claiming his sacrifice. Now, tell me your name.”

He bowed low and smiled up at her, “Nice to meet you, my princess. I'm Emperor Watatsumi. We must leave now if we wish to arrive at my kingdom before morning.” Returning to his regal stance, he offered his hand.

Alexandria glared, “Wait, wait, wait. What is going on? The dragon was suppose to take my life in order for the safety of my home.”

Watatsumi slowly took his hand and touched her flushed cheek, “I am, Princess Alexandria, I am. You're life is no longer yours. It is mine because you are to be my wife and my empress.” She paled yet again and was speechless, “Now come.”

She wasn't allowed another word or even a full thought before Watatsumi swiftly transformed into a large and dangerous dragon and carried his sacrifice away to a kingdom thousands of miles away.

Ohhh and then? I want to know what happens then. bad or good is the question