Book Review: A Love By Any Other Measure 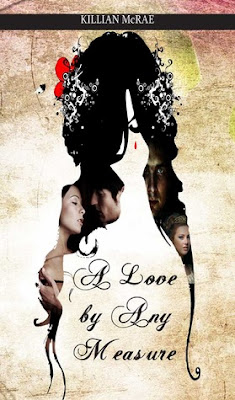 Title: A Love by Any MeasureGenre: Historical RomancePages: ebook
First Published: November 11th, 2011Where I Got It: Given to me to read and review for Charisma Media Network for my honest opinion

"An Irish lass. An English lord.
A love that overcomes all boundaries. August Grayson has secretly dreamt of the girl living on his family’s Irish estate since childhoods spent together in Killarney. Now a proper Lord of the British Empire, he knows that Maeve could never be more than just a distant fantasy. Still, if only... Maeve O’Connor owns nothing in this world but her good name, which proves just enough to win a proposal for a marriage of convenience to a good, Irish lad. Until the wedding, however, she’s in dire straits. Rent on the cottage she and her father share is due, but there simply isn’t the money to pay. Driven to desperation, Maeve hopes Lord Grayson, her childhood-chum-turned-dashing-English-rogue, will prove lenient when she comes seeking clemency. The temptation presented proves too much, and August offers Maeve a compromise: should she permit him twice as long on each succeeding visit to do whatever he wishes in pursuit of his pleasure, he will consider her rent paid. Starting with a mere five seconds, pulses soon out race the ticking clock, as August’s desires become Maeve’s own. Passion blinds them to the challenges closing in on both the Irish and English fronts, threatening to destroy the love they’ve discovered. Working to bridge that which divides them, tempting fate with each stolen kiss, and torn between desire and obligation, Maeve and August must strive to overcome all and find a love by any measure... "

Like earlier stated, I was given this to read for my honest opinion by CMN and the author.

This wasn't just any typical HR. There are so many hurdles for these two lovebirds. The author, in my opinion, gave this a very realistic feel to it. She defiantly made this romance a hard once for Maeve and August. She's a poor Irish gal and August is a half Irish, half English lord; which we all know is a pretty much impossible love because of the hatred felt on both sides during this time. Kuddos Killian McRae!

More kuddos to Killian McRae because the story had a nice flow, even with adding little snipbits from past memories and future events. It all worked well together. I loved all the twists and turns through the story! It made it very addicting and hard to put down.

Maeve may have been naive, but I really liked her. I hated her for loving August though, I feel like he didn't deserve her. I really don't like August. He's a liar and selfish and just a jerk. I was rooting for Owen Murphy! Owen is my type of man. Hard working, understanding, good-looking, Irish, and more gentlemanly than stinky August. Yes, August "loved" Maeve but he didn't deserve her at all. From page one I knew I wouldn't like August.

All-in-all I really liked this story. It's not your typical girl-meets-boy-they-fall-in-love-boy-loses-girl-boy-fights-for-girl-HEA tale, there are many hurdles and many complexes that need to be overcome. It felt realistic and keeps you on the edge of your seat. I may have been anti-August, I still couldn't help but 'awwwwww' when they finally found their HEA. I was greatly upset, though, that one of my favorite characters was killed off! Meh! However, I'm use to authors killing my favorites, so it's no biggie. I would recommend this to HR lovers who like a little twist mixed in. Out of five stars I grant this 4 stars.

I must apologize for the small-ish review, I had to limit what I said because I was fearful of giving away too much. haha

I don't like usual HR books but a HR with a twist... thanks for a great review!

Anachronist, yeah it wasn't your every day HR. Thanks for stopping by!

Susan, it was pretty good. A little but of that, but generally my not-so favorite characters are characters I did not like (aka at times hated). The reasons can vary.

Allison, it was really good. :D