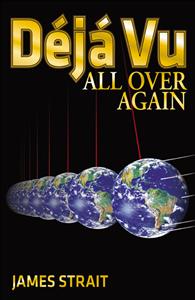 Title: Deja Vu All Over AgainGenre: Science Fiction, Dystopia, a touch of Romance, Disaster, and FantasyPages: ebook
First Published: February 10th, 2012Where I Got It: Given to me to read and review for Charisma Media Network for my honest opinion

"It had long been debated that the end of days for planet earth was set in concrete as December 21, 2012. Mathematical savant Ana Christensen was merely following her instincts when working a theorem in a direction and style that could have never been accepted by traditional mathematicians. As a result she stumbled upon an ancient Mayan creation, a time loop beginning in 3114BC and ending on the long contested twenty first century date. In a dynamic race against time, Ana and her male compatriot battle the forces of individual evil, bureaucracy, paramilitary mercenaries, and most powerful of all...destiny"

Like earlier stated, I read this for CMN and the author for my honest opinion.

Okay. These type of books/movies are not my normal cup of tea. I'm not big on the dystopia or disaster genre. My mom would be drooling all over this and she will be once I allow her to use my Kindle. However, I was asked by the my fellow STARS at CMN if I could pick this up and give it a shot. You only live once (unless you believe in reincarnation), so why not. However, I will note that this review will be a little on the short side.

It wasn't too bad by comparison of other books/movies about the ending of the world or the possibility of the world ending. I loved the fact that James Strait played with the notion that with the ending of the Mayan calendar there will be a loop of time. This plays a little on my own belief. It doesn't say anywhere ANYWHERE that the world will end because the calendar ends. The Mayans just ran out of room and they say it starts all over again. That is it. No the world will not burst into flames or whatever. I found rather amusing that James Strait took the "all over again" literally. Its rather entertaining.

Honestly, my brain had a hard time grasping what was going on some of the time. Science isn't my cup of tea either, so this was a brain teaser for me. Perhaps it didn't help that I had a hard time paying attention. I found myself getting distracted and whatnot. Or perhaps I got distracted easily because I was confused. I'm not sure what is the catalyst in this solution (ha, I did learn something from AP Chemistry!).

I must give major kuddos to James Strait for having Ana be the big ol' hero! Normally in books and movies like this the main person/hero is a guy named Jack (or whatever). I also loved the little sprinkle of romance he added to keep the story light from time to time. ^.^

All-in-all I may have been confused, distracted, and slight bored at times, but I did kind of like it! It wasn't my cup of tea, but I know for sure my mom will be IN LOVE WITH THIS! If you are like my mom then this is the book for you! Don't let my 'eh it's okay' feeling persuade you away, give it a try! Out of five stars I grant this 3 stars.

Lol, bored and distracted but still liking it, I kind of know the feeling

yeeeeeaaa this is an odd one for me...for not being something I normally like I was rather amused. ^.^