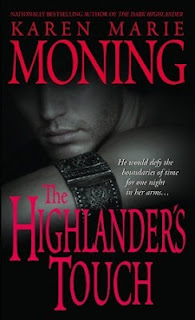 
"A Warrior Of Immortal Powers
He was a mighty Scottish warrior who lived in a world bound by ancient laws and timeless magic. But no immortal powers could prepare the laird of Castle Brodie for the lovely accursed lass who stood before him. A terrible trick of fate had sent her 700 years back in time and into his private chamber to tempt him with her beauty—and seduce him with a desire he could never fulfill. For this woman he burned to possess was alsothe woman he had foresworn to destroy. A Woman Caught In The Mists Of TimeWhen Lisa felt the earth move under her feet, the fiercely independent 21st-century woman never dreamed she was falling...into another century. But the powerful, naked warrior who stood glaring down at her was only too real...and too dangerously arousing. Irresistibly handsome he might be, but Lisa had no intention of remaining in this savage land torn by treachery and war. How could she know that her seductive captor had other plans for her...plans that would save her from a tragic fate? Or that this man who had long ago forsaken love would defy time itself to claim her for his own...."

This is the third book in the Highlander's series. However, I feel like this could stand alone. It's a prequel in a weird sense. It takes place many years beforehand so all is well.

At first I contemplated skipping this one and going to the 4th novel, but I'm a stickler to rules (just like Cin) so I read this...I'm sure glad I did! I could barely put it down! Oh my was I addicted to this one. I even took this book to work earlier and read on my break. I never read on my break.

Of course this is an HR/HF so there is bound to be an happily-ever-after, but I was so worried there wouldn't be a happy ending! Poor Lisa....I couldn't imagine being in her shoes. Yes, it is nice to have a hunky Scottish man drooling all over you, but her poor Ma was dying in modern time...alone and scared for Lisa's well-being. There was nothing Lisa could do, but worry and worry. Poor girl.

Then there is poor Circenn! He's been alive for 700 years and has lost everyone and everything he has loved. He had to watch his friends die and his family drop like flies. So sad. I wouldn't want to be in his shoes! Immortality is a bitter thing and I imagine I would be angry and cold like him. It takes him a while to open his heart again, but when it does....wow. He sure does now how to love a woman. I wish I could find a guy like him. *sighs*

Even with these two lovers being in self-misery, they have such strength and pride that they didn't let it completely take over. I'm so glad that Karen Marie Moning created these two characters for each other. I tire of one miserable character and the other one perfect with the perfect life. Everyone suffers with something and I felt that these issues made these two characters very real and 3D.

Again, Karen Marie Moning did a wonderful job balancing the fantasy aspect and the historical aspect. She did a lovely job just like the other two books. However, there is a touch more magic and fantasy in this one then in the others because of the fact that Circenn is immortal and all the faerys are more involved in this plot. We get to see more of their world and learn more of their secrets. I was excited about this. I like the Faery Queen and I'm even beginning to like Adam Black (the baddie from the first book). Perhaps it is because you begin to understand him a little more.

Even though I highly enjoyed this book, I groaned at the ending. Really? Really?! What happens? Yes, I know they end up together, but there are so many unanswered questions. Gah. Perhaps we'll learn more when Adam Black gets his own book (which is a while away). Oh well, I guess.

All-in-all, this was a highly addicting book and the series is starting to make me addicted. I already ordered the next book in the series from the library. The nearest one is in Bay City, so I won't be able to read that for a wee bit. Meh. -.- Oh well. Even though the ending bugged me to no end (hahaha pun intended) I still enjoyed it. The main characters and even the side characters were well-balanced and 3D. I would recommend this to those who like some fantasy sprinkled in with their HR novels. Out of five stars I grant this 4 stars. I couldn't give it a 5 due to the unanswered questions....


Favorite Character(s): Lisa, Circenn, Robert the Bruce, The Faery Queen, Catherine, and Adam Black (beginning to like him)


Not-so Favorite Character(s): No one really...I did dislike Adam Black until 30 pages in...


Favorite Quote(s): “He ran a hand over his face and shook his head. "Lass, I have never lied to you. I adore you and there have never been any other women from the future here. And these"- he flung a tampon in the air- "cleaning swabs, I cannot fathom why they upset you so greatly, but I assure you I have never let the maids use them."
Lisa's brow furrowed. No man could be so stupid. "Cleaning Swabs?"He snatched up a gun and jerked the barrel in her direction, and an unwrapped tampon shot out. It was coated with black from the slow corrosion of the steel. She eyed it for a moment, bent, and plucked it from the floor. "You clean your guns with these?"He lowered the gun. "Is that not the purpose for which they were designed? I vow I could not conceive of another.""Didn't you read the box?""There were too many words I didn't understand!”