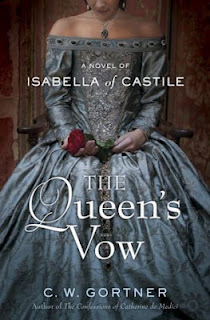 Title: The Queen's VowGenre: Historical FictionPages: 382
First Published: June 12th, 2012Where I Got It: Borrowed from Library

"No one believed I was destined for greatness.
So begins Isabella’s story, in this evocative, vividly imagined novel about one of history’s most famous and controversial queens—the warrior who united a fractured country, the champion of the faith whose reign gave rise to the Inquisition, and the visionary who sent Columbus to discover a New World. Acclaimed author C. W. Gortner envisages the turbulent early years of a woman whose mythic rise to power would go on to transform a monarchy, a nation, and the world.  Young Isabella is barely a teenager when she and her brother are taken from their mother’s home to live under the watchful eye of their half-brother, King Enrique, and his sultry, conniving queen. There, Isabella is thrust into danger when she becomes an unwitting pawn in a plot to dethrone Enrique. Suspected of treason and held captive, she treads a perilous path, torn between loyalties, until at age seventeen she suddenly finds herself heiress of Castile, the largest kingdom in Spain. Plunged into a deadly conflict to secure her crown, she is determined to wed the one man she loves yet who is forbidden to her—Fernando, prince of Aragon. As they unite their two realms under “one crown, one country, one faith,” Isabella and Fernando face an impoverished Spain beset by enemies. With the future of her throne at stake, Isabella resists the zealous demands of the inquisitor Torquemada even as she is seduced by the dreams of an enigmatic navigator named Columbus. But when the Moors of the southern domain of Granada declare war, a violent, treacherous battle against an ancient adversary erupts, one that will test all of Isabella’s resolve, her courage, and her tenacious belief in her destiny. From the glorious palaces of Segovia to the battlefields of Granada and the intrigue-laden gardens of Seville, The Queen’s Vow sweeps us into the tumultuous forging of a nation and the complex, fascinating heart of the woman who overcame all odds to become Isabella of Castile."

This is the first book I've read by C.W Gortner and the first I've read about Queen Isabella.

I've always been pretty neutral to Queen Isabella and her husband due to the fact that I'm not a huge fan of their daughter Catalina (aka Queen Catherine of England) and how they helped find the Americas. However, my eye was drawn to this at the library in the 'New Book' section and I decided to learn some more of her journey to becoming legend. Now that her tale is done, I am in awe of her. I actually like her even though she has some pretty bad things attached to her name. Yes, she had some pretty bad things happen in her country, but I personally believe if she hadn't "done" those things Spain wouldn't be what it is today. It would probably still be fragmented and torn and we'd have a dozen different countries to the list of countries.

Alright I shall usher the history nerd to go back to her corner and stop the rambling.

I found the author's writing very flowy and addicting! I felt like I was truly there and I wanted...no needed to now what was going to happen next (even though I knew). How odd. I forgot all the historical facts while reading. There is just something about his writing that I liked and I will be checking out some of his other books.

Even though I thought Isabella was a Catholic fanatic, I liked her! She certainly was a woman to reckon with and I adored that. She was strong-willed and smart. I was also surprised how she allowed her husband equal powers...she didn't have him just become her consort (which is what I would have done). I feel like she really felt that women and men should be equal of each other.

She was defiantly a woman a head of her times in a lot of aspects. I must applaud C.W Gortner for writing Isabella as one who had a hard ass time deciding what to do with the Jews of her country. She didn't hate them and it was hard for her to have them banished, because she realized that they were citizens and her subjects. She may have been a Catholic fanatic, but she had a heart and it seemed it really haunted her the whole Inquisition nonsense.

There was nothing I could really nick-pick about this one! I loved this book! I found myself staying up late to just read this. Pretty sad, eh? C.W Gortner is wonderful writer and I hope his other books cause me to second look at historical figures I never really care for and see their side of the tale.

This book does have an element of romance in it, because Isabella and Ferando did love each other, but it's hard for me to recommend this to HR lovers, because the romance level is limited. I would recommend this to those who love Historical Fictions with a touch of romance intertwined.Out of five stars I grant this 5 stars. Woot woot!

Great. How about linking in to Books You Loved:
Have a great week!

I need to read this one :D I have never read a boook about her before

Carole, I should! I really did like this. And thanks! You too!

B, you should. I haven't either and it was interesting to see her side of the many tales that I've read in other books.

thanks for linking in to Books You Loved. If you pop back in a few days there should be a nice collection of books to look at. Cheers

No problem! Thanks for informing me of this nice little linky thing! Great idea, fyi. Sure! And thanks for popping by here. ^.^