Book Review: Kiss of the Highlander 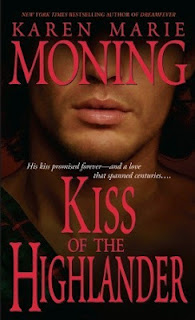 Title: Kiss of the Highlander (Highlander #4)Genre: Historical Romance, Fantasy, Paranormal, PRPages: 369
First Published: 2001Where I Got It: Borrowed from library

"A laird trapped between centuries...Enchanted by a powerful spell, Highland laird Drustan MacKeltar slumbered for nearly five centuries hidden deep in a cave, until an unlikely savior awakened him. The enticing lass who dressed and spoke like no woman he'd ever known was from his distant future, where crumbled ruins were all that remained of his vanished world. Drustan knew he had to return to his own century if he was to save his people from a terrible fate. And he needed the bewitching woman by his side....A woman changed forever in his arms...Gwen Cassidy had come to Scotland to shake up her humdrum life and, just maybe, meet a man. How could she have known that a tumble down a Highland ravine would send her plunging into an underground cavern — to land atop the most devastatingly seductive man she'd ever seen? Or that once he'd kissed her, he wouldn't let her go?Bound to Drustan by a passion stronger than time, Gwen is swept back to sixteenth-century Scotland, where a treacherous enemy plots against them ... and where a warrior with the power to change history will defy time itself for the woman he loves...."

This is the fourth book in the Highlander series by Karen Marie Moning. However, this would stand perfectly well as a stand-alone novel because there is little reference to any of the other books. Not even Adam Black poked his head around in this one.

The original plan was to take a little break from this series, but when I read the summary, I knew I had to read this as soon as I could! How lucky is Gwen Cassidy to quite literally fall upon good luck. She literally fell on one good looking man in a cavern. Damn her. ^.^ I wish I would randomly stumble upon a man like yummah ol' Drustan. *daydreams*

It was such a different take on time travel romances. He was enchanted and was put to sleep for 500 years! However, that was just a small smudge of the story. Drustan needs to go back to his time and save his family from complete destruction.

Throughout the entire book I was sitting on the edge of my seat...I could barely put the book down. There were so many variables placed on the table, it was really hard to figure out what would happen next. Kuddos to Karen Maire Moning for keeping me guessing in this one! Even when I thought Gwen and Drustan found their HEA, the author threw in another issue that would tear them apart...perhaps forever.  I wish I could say more, but I must refrain from being a bad spoiler kid. Being a romance, though, they will find their HEA and I had to keep reminding myself of this fact.

Okay...time for what I didn't like: I was confused at certain parts. Yes, usually time travel novels normally confuse me a wee bit. However, Karen Marie Moning has kept me rather out of the confusion box with her past novels but this one...she lost me at times. At one point I shut the book and glared because I didn't understand why a certain event happened the way it did. Sorry for being so vague...I'm trying to not have any spoilers. But she had my head all in knots at a couple different points. It's probably my fault not the authors for my confusion.

Anyways, I gobbled this up in just a couple of days and I CAN NOT WAIT UNTIL I READ THE NEXT ONE! The little "trailer" for the next one has me drooling.

Advice from yours truley
I inserted this just because I find it rather important for all to know who wants to read this novel and perhaps the second one.

At the end of the book make to read the 'From the Author' little section. Not only does she give a little epilogue from Gwen and Drustan. She also clears up a couple notes and fills in some empty spaces, so even gives a 'trailer' to the next book. However, she does this all in the form of a letter left by Silvan, Drustan's papa, to Drustan and Gwen. Do read it! I just happened to read that section.

Back to Scheduled Review

Yes, the "trailer"  left me wanting more! However, I shall refrain for a some time so as to give the series a break and read the other books sitting in my pile. ^.^ Well, I would recommend this to those that love historical romances mixed with a little bit of time travel and fantasy elements. Out of five stars I grant this 4 stars.

Favorite Character(s): Gwen, Drustan, Silvan (hehehe), Nell (wish I knew her), and Daegus
Not-so Favorite Character(s): Nevin's crazy ol' mama (wench)
Favorite Quote(s): More like a word that Gwen used to call men she wanted to take her virginity, "cherry-pickers". hahahaha I busted out laughing when she refereed to that in her head.

Oh and..is evil captcha really necessary`? :( they have made it harder now

Aye...it is harder now. I think I shall remove it, because it's been bothering me on other blogs too.

Yay, thanks :) They do make it harder and harder! First the numbers, some of them grainy and now the sparkles. I just mess up too often these days

Well, I'm probably one of the few, but I've not read a Highlander book yet. *ducks* I should rectify that one day. :) Thanks for the tips and review. :)

Melissa, really? You should do it! I think you would enjoy one or many more. ;D