Hey everyone! You all doing okay?
I know I usually post 'Wordless Wednesday' on today (or whatever), but I'm feeling like posting something different. Why? There are a few reasons: 1) I've been reading a lot of non-book/non-movie posts that have inspired the writer in me to branch out and 2) Last night I was attacked by a spider!


Yes, last night I was attacked! After I got home from work, I decided to take a shower (which is normal behavior). The water was all heated up and I jumped in. Next thing I see on my shower curtain is a huge, nasty spider! I gasped (I don't scream, odd, eh?), jumped out, and grabbed a dirty pair of PJ bottoms and got in my battle poise. Slowly, but surely the spider began coming after me. I killed the little bugger and continued to shower in terror. Once I was clean and my anxiety attack was finished, I got changed and began to think. Why am I so afraid of spiders? Why do I have all the phobias I have? Why does anyone really experience this phenomenon?

Yes, I took Psychology a couple semester ago, but we barely touched base on it. I understand some phobias come out of horrible experiences we've lived through. For example, when I was extremely young I was nearly kidnapped right from my mom's hand and so now I experience a phobia of being kidnapped. However, I was never really hurt by spiders in my youth, so why do I fear them? So many questions and a lot of answers, I bet. 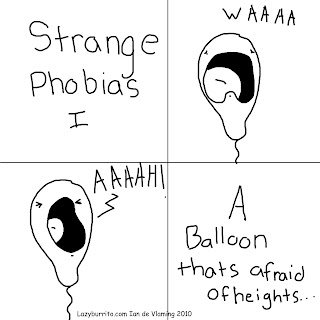 Here's a snipbit from a BBC News article on phobias:


"An estimated 13% of the adult population will develop a phobia at some point in their life, according to one study. But why do people develop phobias?
It is all related to anxiety, which is a normal response to stress or danger and often called the "flight or fight" response. It involves adrenalin being quickly pumped through the body enabling it to cope with whatever comes its way.
Problems start when this response is out of proportion to the actual danger or is generated when there is no danger present. That is when it can become an anxiety disorder, of which phobias are a category.

There are several factors that can trigger such a disorder, according to the National Phobics Society (NPS):

-physical factors, such as thyroid problems
-biochemical imbalance and changes in the levels of chemical messengers in the brain
For some people it can be one of these factors that results in a phobia, while for others it can be a combination. It is also quite common for people to suffer from more than one phobia at the same time.While no one trigger is related to a particular phobia, often the more bizarre fears are caused by stress, while more common ones - such as the fear of spiders - are more likely to be linked to childhood environment."
There is also another theory that the article doesn't mention. For some it may be completely nuts, but hey, anything is possible. Right? I read about this theory from one of Sylvia Browne's many books. She believes that some fears/phobias (some, not all) are caused from a past life experience. This would suggest that one of my fears/phobias are caused from an event from another life I "lived".
Which could explain my fear of falling backwards, having my neck touched with objects (besides for necklaces), or my phobia of spiders. I've never been bitten by a spider, but I'm deathly afraid of them. Also, I may be clumsy, but why have a fear of falling backwards? I've never been choked or whatever in this life, so maybe events from my past lives could still be affecting me today? Who knows? Nothing is 100% proved and set in stone. That's why they're called "theories".
Anything is possible, even reincarnation or Big Foot. However, these subjects will be brought to life sooner or later. Haha. I'm such a tease.
What phobias/fears do you have?
Thanks for listening to my ramblings.
========================
<3CaroleRae 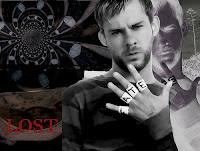 I was thinking about this just last night. I used to really hate turtlenecks, though they work for me now. But still I do not like things around my neck. And I used to dislike the carseatbelt too. When it was close to my tummy, thinking, that with my fear of knives and I was stabbed.

I sometimes can wear turtlenecks, but only so high up. Wow, maybe. Anything is possible.

Who is that guy in the picture?

He's Dominic monaghan (spell?) He played Charlie on LOST and merry from LOTR.