Book Review: A Hand For Each 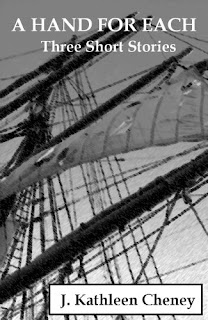 Author:  J. Kathleen CheneyTitle: A Hand for Each: Three Short StoriesGenre: Mystery, short stories, fantasyPages: ebook First Published: September 17th, 2011Where I Got It: My shelf (free from Amazon)
WWI Challenge: first one


'This collection of short stories features three tales of supernatural change. In "A Hand for Each", young Lieutenant Davies finds himself at the mercy of the sea when his ship is attacked by islanders. (Originally published in Shimmer Magazine, 2007.)"Masks of War" explores the 'Masks for Facial Disfigurement' Department in WW1 England. A life-like mask can hide the ghastly wounds of veterans of the Great War, but Lieutenant Grey suspects there's something more at work than mere tin and paint. (Originally published in Fantasy Magazine, 2008.)"Fleurs du Mal" tells the story of a man who finds himself falling into a botanical trap. Will Bertrand be able to save his brother before he falls prey to a seductive woman? (Originally published in Beneath Ceaseless Skies, 2010.)'


These three are the first short stories I have read in a long time. I had to keep reminding myself that, yes, these are short and the story will be quick and...well...short. Since there are three short stories, I'll break this review up into three categories.  One for each:


A Hand for Each
The story follows Davies, who's a lieutenant on a ship that's attacked by islanders and he's left alone to the mercy of the sea. I can't say much else without ruining the rest of the story.


I zoomed right through this story, because I was dying to see what would happen next! I felt so bad for the guy, because imagine being all alone on a ship in the middle of the fickle ocean. Scary thought, I know. I loved this short story, but I hated the ending. The ending was so confusing, but it made sense. If that makes sense? All-in-all, it was a good story.


Maskes of War
Set in WWI, the story follows Lieutenant Grey and his involvement of The Department of Facial Disfigurement. He was badly injured during a battle and is given a mask to cover up his destroyed face. Grey chaperons some other badly injured men to visit their families. However, there is more to the tin masks than the paint...


This story freaked me out a little, but it's probably my favorite story in this book. I loved how it was creepy, but in a good way. I wish this could have been a longer story, but maybe it would have lost some of its magic. Who knows? Even though the story was a decently dark story, I felt a huge amount of hope in the underlying tone.  Overall, I really loved this story!


Fleurs du Mal
The title, in english, means flowers of evil. Doesn't that make you want to read it? Bertrand is a WWI veteran who swore of women since his wife died giving birth to a bastard child while he was gone. He goes to France to save his brother from the clutches of this seductive woman. Right from the start, he knows something is amiss. The bigger question is...can he save himself from the mysterious woman or does he want to stay in her tangles?


This was a wonderful and creepy read! However, I had to remind myself that this was a short story, so events happen very quickly. If  J. Kathleen Cheney ever wanted to make a full story, I would put my vote for this one! Well, I would probably beg just so I could see how it ended. It didn't really "end" for say. She made the ending for everyone to put their own guess on. It ended like 'The Sopranos'. Even though I was upset, I still really liked it.


Final Verdict
All three stories were creepy, but really good. J. Kathleen Cheney did a wonderful job with the telling of these stories. I'll have to check out more of her short stories in the future. I would recommend this to anyone who likes a mystery, creepy stories, and its free at Amazon, so people who like free stuff; this is for you! Out of five stars, I grant this one 4 stars.


PS - This is my first book for the WWI Reading Challenge

You already read one for that challenge?! Oh, I fear it might take months still for me

haha. Well, I had just stumbled upon this one when I was surfing for free kindle books for my new kindle fire.