"In the aftermath of the Civil War, the Bennet family has just moved from Ohio to the town of Rosings, Texas, set on creating a fresh start. But their daughter Beth still prefers the familiarity of Ohio to the plains of Texas-that is, until she encounters Will Darcy, the reclusive owner of Pemberley Ranch. Will and Beth are instantly smitten, but pride, prejudice, and a gang of villains determined to take over Rosings threaten to keep them apart. This fresh idea in the world of Jane Austen retellings brings together the world of Pride and Prejudice with the struggles of the antebellum South."


Sorry for the math equation. But anyways...this is the first Austen remake that I've read in a while. After finishing this, my love for the remakes has been rekindled. Not only was this a very interesting take on the beloved P&P novel by Jane Austen, but it was also a little risky. If not done correctly, the story would've ended cheesy. HOWEVER, Jack Caldwell did a wonderful job! The balance of similarities and differences was nice and balanced.


Mr. Whitehead (Mr Wickham) was even more of a scoundrel and bastard, Charlotte Lucas and Ms. Anne Burroughes are tougher and are actually characters I would like to meet. Billy Collins (Mr. Collins)..well...is even more of an idiot, Fitzwilliam is a sexy cowhand who finds the love of his life, Cate Burroughes is a "bitchy" ranch owner, and Jack Caldwell even included some other characters from other Austen novels; which was rather clever of him. I loved how he played on the weaknesses and strengths of the original characters and molded them into what they would like if they lived in the Wild, Wild west...not the country of England.


The story was a cute read and I could barely put it down. Yes, the beginning was a little slow, but hey...most beginnings are. Thinking on what I said earlier...it wasn't a "cute read" all the times, because some parts were very emotional and heartbreaking. Like the tale of Caroline Bingley or the story behind what Whitehead did to Charles and Darcy during the war...also Jack Caldwell brought up many points and historical facts about the Civil War that people may not know about. For instance, the core of the war wasn't about freeing the slaves. That was the moral justification that the North put on the war to keep men joining. Yes, it was a big part of the war, but it was just a small puzzle piece.


Anywho...too be honest, I preferred Darcy's POV much better than Beth's or the other characters. I'm a sucker for Darcy and other tortured heroes. However, the love he has for Beth isn't his only inner turmoil. He still suffers from the war and from the knowledge that Whitehead is around town. I didn't like this version of Lizzy. I can't explain it, but she was annoying and I don't know.


The only thing I really winced at this book was the huge time jumps. Yes, I know time jumps are important, but in between those jumps events would occur and we missed them! For instance, Fitzwilliam and his lover/future bride went from crushing to making out in a cemetery! When did this happen? Oh yeah, there was a month gap, I forgot. That's not the only time that happened. It happened a few times and it annoyed me.


Overall, this was good read. I could barely put the book down! Jack Caldwell did a wonderful job blending the Wild, Wild West with P&P. Out of all the P&P remakes, this was my favorite. The only thing that annoyed me was the time jumps and missing important events. Even though I loathed that, I enjoyed everything else! Out of five star, I grant this one 4 stars. 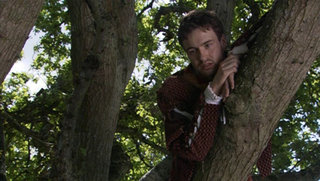 I really enjoyed this book. You could name the characters differently and take away all references to P&P and it would still be a great read!

Lol, I sure liked Darcy's POV the best too. He was such a fine cowboy and yummy!

Anna, I must agree with you! Even if the story had NOTHING to do with P&P, I would still have adored it.

Blodeuedd, his POV was the best and the most interesting BY FAR. Yummah. lol. ^.^