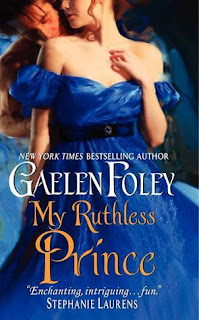 
"The Inferno Club: To London Society, they’re notorious for their scandalous pursuits. In private, these warriors would risk their lives for king and country.

His brother warriors fear the Earl of Westwood has turned traitor, but Emily Harper knows this is impossible for the man she has loved since childhood . . . as impossible as a marriage between them could ever be—she, the gamekeeper’s daughter and he, a bold and adventurous nobleman. Driven by hatred and revenge, Westwood is playing a deadly game of deception, bent on destroying the enemy’s dark conspiracy from the inside, and he’s furious when Emily plunges herself into danger for his sake. Forced into close quarters, their long-suppressed desire explodes into all-consuming passion. Emily knows her love can save him . . . but Westwood is a man who doesn’t want to be saved."

This is the 4th installment of Gaelen Foley's Inferno Club series. Unlike the other 3 books that could be read as stand-alone novels, this one isn't. It has a lot of references to the previous ones.
This is Drake's book and I couldn't wait to get my hands on it! If you love a broken hero, Drake is the epitome of a broken hero. I feel like he tops the cake, because he went through utter Hell and back. He was tortured by the Inferno Club's enemies, the Promethians and then is saved and "turned" into one himself. So day after day he is surrounded by the men who bayed for his blood and tortured him until his mind collapsed upon itself. However, it's all a ruse. Even though you know its a ruse, there are many points where even the reader isn't sure...
As you may or may not know, I simply adore Gaelen Foley! She's my favorite historical romance writer and I can't get enough of her books. This one is no exception! Even though I feel like this is the darkest of all her books and I liked it. I loved the tension and the how-the-heck-is-this-going-to-end feel to it. I had no idea how Drake and Emily were going to get their happy ending. Which they do, of course...it isn't in the historical romance genre for no reason. ^.^
Like I stated before...this was a very dark story. I felt it was too dark sometimes and I would find myself a little depressed. I tend to absorb the feeling of the book and actually feel it. For a couple minutes after setting the book down to take a break, I would sometimes feel in a dark mood. So if you're like me, I would warn you of this. However, it was worth it! The overall feel of the book may have been dark, but there was a bright light at the end of the tunnel.
Even though I really like this book, in some spots the story seemed to drag a little and never seem to end. I think Gaelen Foley would sense this "drag" and make a huge event occur, so it was remedied. The story would've been very dry if she didn't include Niall Bank's and Max Rotherstone's (hero from the first one My Wicked Marquess) point of view sprinkled here and there. It added more tension and more fun.
All-in-all, I really adored this book! I could barely put it down. I think this maybe one of my favorites of all of Gaelen Foley's books. It may have been extremely dark and had a few dragging parts, but I couldn't get enough of Drake's story. He, in my opinion, is one of the most broken heroes and most complex. I loved him and the book. Out of five stars, I grant this one 5 stars our of 5 stars! Woot Woot! What a great way to begin the year.
Favorite Character(s): Drake Westwood, Emily Harper, and Max Rotherstone
Not-so Favorite Character(s): James (he did get a little of my respect in the end) and all the Promethians