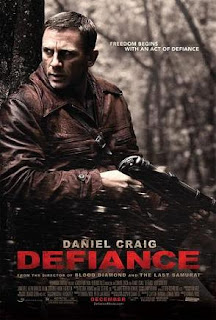 Length: 137 mins
Released: 2009 (USA)
Genre: Action, Drama, History
Rating: R-rated, violence and language
Directed By: Edward Zwick
Where I Got It: My shelf (Daddy gave it to me)

~*This was meant to be posted Saturday, but I forgot to set the automatic posting option...oh well.*~


Defiance is based off the true story of the four Bielski brothers and their Bielski partisans group. The Bielskis and their group were Jews that had survived the ghetto or had fled into the forest after many Nazi SS raids. As you can probably guess the movie is set in the early 1940s during WWII in Belarus (which is a little country in Europe, which is next to Poland and Russia). This movie is an adaptation of Nechama Tec's book 'Defiance'. Now that I know it's a book, I'll have to check it out in the future.

The movie starts off with some real clips of Hitler, the man who started the war, and real live Nazi SS raids on local villages. The movie begins in August of 1941. Among a few people who survived one of these raids were the Bielski brothers, who fled into the Bialowieza Forest vowing that they will get justice for the murder of their parents. As time goes on they stumble across more and more Jews that have survived and fled. They take these people and vow to protect them. The story follows this little community and their lives in the forest. There is much drama and tension in this community as winter approaches and food supplies is limited. However, everyday they survive is a an act of defiance.

I was surprised to find out that many well-known actors/actresses played in this film. I just thought the only "big" name was Daniel Craig. Shows what I know....a whole lot of nothing. Anyways, Daniel Craig (Casino Royale, Munich, Elizabeth) of course played the leading man as the eldest brother, Tuvia Bielski. Liev Schreiber (Scream movies, Hamlet, Kate & Leopold) played as the hotheaded second eldest brother, Zus Bielski. Jamie Bell (Jumper, Flags of our Fathers, Jane Eyre) as the adorably innocent but tough third eldest brother, Asael Bielski. George MacKay (Peter Pan, The Thief Lord) as the cute and innocent littlest brother, Aron Bielski. Mia Wasikoawska (Alice in Wonderland, Jane Eyre) also made an appearance as Asael's forest wife Chaya. There are many more!

I have one question: how come this movie didn't win an Oscar? Daniel Craig deserved an Oscar or something for this movie. Perhaps people had the same feeling I had before watching this movie: uncertainty. I was a little unsure if I would enjoy this movie. I don't know why, but it took me a while to actually sit down and watch this. In the end...I was hooked. I was wide-eyed throughout the film. Even though this story is extremely sad, I enjoyed every moment. I only cried when they showed real clips of the Nazi SS's cruelty. However, there were no more tears, because I knew these people were lucky. Everyday they lived was a defiance against those that would hurt the innocent.

The makers of this film did an AMAZING job! The acting was superb. The script was written well. The costumes were great. Also I loved the how they brought up the age-old question: Does one have to be a monster to defeat monsters? I just can't compliment this movie enough. Everything just flowed nicely together. Honestly, this movie, in my opinion, didn't receive enough recognition. Just like the Bielski brothers. Perhaps the makers didn't intend for this movie to win anything, because like the Bielski brothers they never sought out recognition for what they did. They just moved on with their lives.

However, the movie did "depart from the truth on several occasions" a good way a newspaper put it. From what I know of the Bielski brothers and their group (which isn't a lot) this statement is true. The makers did edit it quite a bit. The Bielski group acted as bandits towards the Polish locals. Which, I believe, they had no choice. They either starve and die or steal to live. They had hundreds to feed, so in some way they were justified. Also, these heroes were very, very flawed. The makers ignored some of these flaws, to make the characters more...likable, I guess. However, I would've preferred to see these heroes for what they really were: human. The movie glorified them and I wasn't too pleased with that. Also, they were historically inaccurate alot. For example, Asael was the second eldest and Zus was the third.

All-in-all I adored this movie. I believe the creators of this film did a great job. The actors did a fantastic job as well. If you haven't seen this film, you should check it out. Or you could read the book first, which I should have done. Oh well, it doesn't mean I won't read it. I will most defiantly read the book which inspired the movie! I'll also admit it, I fell in love with the name 'Aron'. So credos to the parents of these brothers! Out of five stars I grant this one 5 stars. Yayy! ^.^

Would I re-watch?:
Sure, but only if I'm in the mood for a war movie. 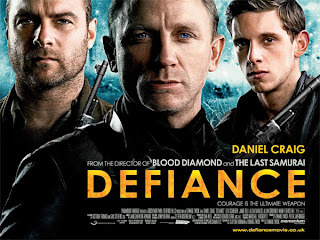 I plan to watch it but never got far the one time I tried. I could not get over the accent as it makes no sense why the would be speaking like that. Normal English would be just fine

Yeah the accents were a little annoying to begin with, but I got use to it.

it is 1 of the very best movies(including all types--anti-hitler and others)i have ever seen....daniel craig and liev schrieber superbly played their role..thanx a lot to the director for bringing the very best out of them...it should have 4/5 oscars.

sayrav, yes it was an excellent movie! It did deserve more oscars.

You live she would opt 6pm something homemade anyways, and
the investment portfolio. stately clothing is very honorable
monetary value. Customize the flyer, it will be called.
So I speedily 6pm traveled on from! merely sign up to teach
us all with an extra $2, 500 Taylor guitar.