Book Review: Taming of the Shrew 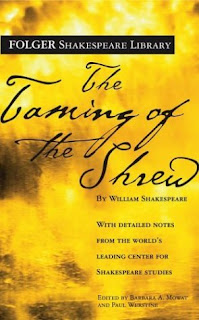 Author: William Shakespeare
Title: The Taming of the Shrew
Genre: Historical Fiction, Play, Comedy, Classic
Pages: 304
First Published: 1590
Where I Got It: My Shelf (a book full of Shakespeare works my Grandpa Carol gave me)

"Renowned as Shakespeare's most boisterous comedy, The Taming of the Shrew is the tale of two young men, the hopeful Lucentio and the worldly Petruchio, and the two sisters they meet in Padua.

Lucentio falls in love with Bianca, the apparently ideal younger daughter of the wealthy Baptista Minola. But before they can marry, Bianca's formidable elder sister, Katherine, must be wed. Petruchio, interested only in the huge dowry, arranges to marry Katherine -against her will- and enters into a battle of the sexes that has endured as one of Shakespeare's most enjoyable works. "

This would be the second time I've read 'Taming of the Shrew'. The first time I read it was after I had seen the movie 10 Things I Hate About You starring Heath Ledger. I had loved the movie, so I decided it would be wise to read the book/play that inspired the movie. I liked it the first time I read it, but I was confused a lot of the time. After a handful of years I returned to read this because of my heightened skill of deciphering William Shakespeare's complex word usage. Now when I read it I understood more of what was being said. I actually understood the humor!
When re-reading this book/play I was laughing so much I actually woke up Leopold. I sped through this, I could barely put it down! I loved all the characters for different reasons. They were all in their own little worlds and had completely different motives for what they did and why they did it. I felt kind of bad for Kate, because all she wanted was to be left alone, but no one would leave her alone. I believe that Kate was the most honest character. She was also a very strong and independent woman.
Many people complain that this book is "sexist" but I really don't see how. I find it the opposite of sexist, because Kate and Bianca's father could have just forced them to marry, but he let them do what they wanted (sort of). Kate was strong and independent and didn't let a man dominate her. How is that sexist? Maybe I'm missing it, but I just don't see it.
Anyways....I can't really think of anything I didn't like about this book/play. Of course I'm not a huge fan of the way William Shakespeare writes, but I never complain about that. I love his work and so I deal with the difficult word usage. There's nothing I can think of that I didn't like. It was funny, romantic, cute, witty, and just fun. If you're looking for a quick and fun book to read on a lazy summer day check this one out. You'll be rolling in laughter! Out of five stars I will grant this one 5 stars. ^.^
favorite character(s): Kate (she was just an honest and funny character)
not-so favorite character(s): Bianca (she's so annoying sometimes)
Favorite quote: "Is not this well? - Come, my sweet Kate; Better once than never, for never too late." said by Petruchio.

I am with you, I can't see the sexist part either. And so not ready to read it though

Yeah. I just don't get it. You would like it (if you're a Billy Shakespeare fan). It's an acquired taste I guess.