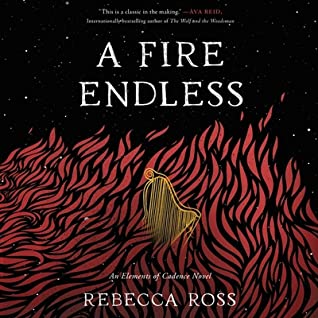 You really should always read books in order, and definetely this one. A lot happened in book 1, and now sadness rules the island.

An Island split in two by warring clans. Magic in abundance in places, while in other places it kills you. Spirits ruled by a dark one.

Adaira learned she is actually from the other clan in book 1. And now she is there , but it is a dark place. Jack is left in the East because he needs to calm the spirits with his song.

The west was a scary place, I would not want to live there. But as it is now the whole island is falling to pieces and people are dying. And Jack and Adair can¨t even be together! Heartbreak. But hope is coming, though it also had me scared because things are going badly.

I liked the story. It is quite special, like it took place on some mythical Scottish island, and the whole world is almost this forgotten island

Ruth U is one of my favorite narrators, mostly cos of the accent she does. It is just so cool and I am always swept away.

East and West. Humans and Spirits. Breccans and Tamerlaines. The Isle of Cadence has always held itself and its residents in a tenuous balance. But now Bane, the spirit of the North Wind, has pushed everyone and everything in his path off-kilter in a bid to claim dominion over all.

In the West, Adaira struggles to adjust to the more brutal, bitter ways of life among the Breccans. Striving to find her place in the clan, she swiftly realizes that it just might be the last role she desires to hold. And while magic blooms effortlessly for the Breccans in the west, the spirits continue to suffer beneath Bane's harsh power, felt in every gust of wind

In the East, Jack is adrift without Adaira until he sings to the ember-weak fire spirits, acquiring a dangerous mission he never expected. One that is destined to lead him westward. Likewise, Torin and Sidra are consumed by a new mystery as sickness spreads first amongst the crops, and then to the people of the Tamerlaine clan. While Sidra desperately searches for a cure, Torin dares to strike a bargain with the spirits--a precarious folly anytime, but especially now as the days grow darker.

With the island falling further out of balance, humans and spirits alike will need to join together to face Bane, and Jack's gift with the harp will be called upon once more. Yet no one can challenge the North Wind without paying a terrible price, and the sacrifice required this time may be more than Jack, Adaira, Torin, and Sidra can bear to pay.

I didn't know about this but it looks good!

This sounds pretty good. I would probably like this one.

Sounds like a solid middle of series fantasy book where it gets the darkest before good things happen. :)

Sophie
Actually this was the end