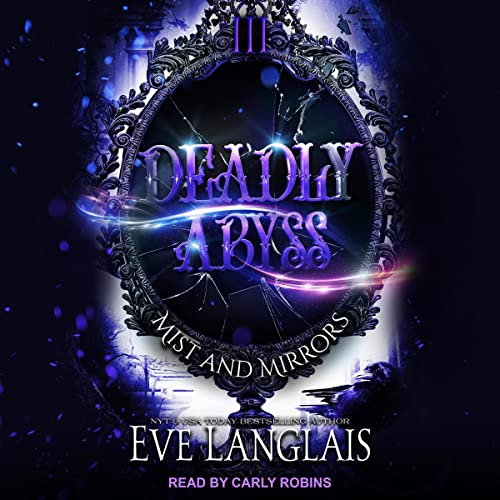 This is the final part of the trilogy, and it had me worried that there would be no conclusion. But when   then end grew close all pieces came together.

Agoth, well previous books sure threw me for a spin. Agoth/Belle, yes it does get confusing, and these truly has to be read in order. There are some real twists and turns.

The world is being engulfed by the mist. There are dark things in the mist. One kingdom holds on, but that kingdom is pretty messed up as we found out in the last book.

As for Agoth, she went into the mist and sees that the "monsters" are not monsters after all.

I enjoyed the series.  It was fantasy, action, romance, and some hot times.

Good narration. I have enjoyed listening to this series by her and she does a great job

The stunning conclusion to Mist and Mirrors featuring betrayal and discovery on the journey to triumph.

Entering the Abyss with its tainted mist is terrifying but there is no other choice. The Valley is in danger and the only hope lies in the hands of the enemy. But are Zanir and his people the real problem? A great crime was committed and the repercussions are finally coming to a head.

As the past continues to reveal itself, the one known as the orphan of the night wonders who she is. What is she capable of? If prophecy can be believed, the fate of the world rests on her. Failure isn't an option. Now if only she knew who to trust.

She'll travel deep into the deadly Abyss seeking answers. She'll find more than she ever expected. But will it be enough?

"into the mist and sees that the "monsters" are not monsters after all" oooo!

I've fallen way behind on her books. I'm curious about what's in the mist now.