Joint Review: The Making of Her by Bernadette Jiwa

Hello all! Blodeuedd and I will be discussing "The Making of Her" by Bernadette Jiwa. Blodeuedd is in red and I am in orange. 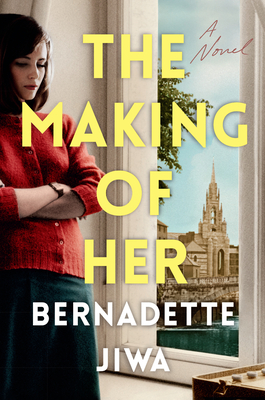 Summary:
Dublin 1996. Joan Egan lives an enviable life. She and her husband, Martin, and daughter, Carmel, are thriving in Dublin at the dawn of an economic boom. But everything changes when Joan receives a letter from Emma, the daughter who she and Martin gave up for adoption thirty years before, asking for a life-or-death favor.
While Joan grapples with the guilt over giving up her baby long ago, she must confront her present as the cracks in her marriage become impossible to ignore and simmering tension with Carmel boils over. Meanwhile, Carmel and Emma must come to terms with the perceived sins of their mother, to imagine a future for their family before it is too late.

This was just a random book I said yes to and made Carole read it too.

Awwww! It sounded too good to not check it out. I’m glad we read it! This is for sure an excellent book club book.

I thought the whole preggo in Ireland in the 60s sounded good cos of all those scandals and all. But there was almost nothing about the effed up things the Catholic church was up to back then. And I still wonder about her siblings?!?!

I do wish we had more seeing her journey when she was young and preggo. We only got glimpses. And yessss I would’ve liked to see what happened to the siblings. Maybe there will be a sequel with her finding all her family?

I did feel a bit disappointed personally, I felt there were many roads that could have been taken. Like did she never look or wonder about them? I’d wonder about my siblings! And yes I felt the whole pregnancy journey should have been more. Now it was more a boring middle-aged couple where the husband was a d*ck.

Yes, it should have been more gutwrenching. I did not even like Emma, I felt she was too oh if my mum had been alone then poor mum, but now she was not so f her.

I get Emma being a little bitter because she didn’t know the story. You finally get a chance to learn and hear Joan’s side, but she was still f her. It’s tragic how it all went down. I felt bad for Joan and Emma and even Carmel. They deserved more. Again…f Martin and his mom. LOL that is all I kept saying the whole time.

I get bitter, but one thinks that after hearing the story she would understand, like hello, your dad?!? Doesn’t that tell you anything? I felt really sorry for Joan. Being stuck with Martin and his toxic mum for 30 years. The ending too was so meh, it needed more impact.

For real. Joan was so young and she was pretty much a prisoner in that house….a bird locked in a gilded cage. I did cheer at the end when Joan did what she did. Good for her. Good for Carmel. I’m mad at Emma for what she did. I am hopeful there will a second book. I feel like there is more story to tell. Like we get to see Joan’s siblings. The ending just ended. Too many loose ends.

Hmm, I wonder how Catholic the author is, maybe she doesn’t want to say too much about 60s practices of taking kids and such. Delve deeper you know. But yes I really wanted to know more. Maybe there were no records, but still, go find them! See, what this book left me was that question.

To be fair…Joan may not know anything about that. If there is another book maybe the author can dive into with Joan looking for her siblings that were taken. I’m sure those poor kids have horror stories!

I do wonder….but hey at least Martin did stand by her. This book could have taken a much much bleaker turn. Her ending up in some home run by nuns, and shunned by her friends.

I’m very, very surprised Martin stayed by her. I still don’t fully get why he just didn’t marry her in London. He was an ass and only wanted to do things on his and his mother’s schedule. Grrrr Martin. Maybe Joan could’ve found a nice fella to take her and her baby in.

Nah, that baby would have been taken from her and adopted, and maybe she finally had made it somewhere to start a new life. But yes I am surprised Martin didn’t just say bye and leave. At least he tried that asshole. And they could just have pretended to have married earlier, but hhh scandal. Well fu Martin, you coward.  Be a man!

Yes. That was his biggest flaw. He was a coward. I like to think that maybe Joan could’ve found another man. Even if they took the baby…maybe when Emma showed up that man would’ve been all “YES! LET’S HELP HER!!!!” IDK. I’m so glad Joan and Carmel womened up.

That other man would totally have been, let’s help her at once! And then it would have taken a happier turn. And maybe they would have hunted down Martin, and he would still be a bitter old man. But this time Joan and Emma would have been all f that guy.

Wishful thinking! I hope there is a book 2. I am invested in these characters…especially Joan, Carmel, and little Ben. I need more of a closure.

I need more closure too.

More is needed, but def a good book for book club. Lots to talk about lol.

The end! Until next time friend.

Carole and Blodeuedd have been blogging for a long while now. The last few years the epic duo has been discussing books, watching movies, and even wetting the pen and sharing their stories with the worldwide web. They both love cats, chocolate, and a good story.

Sorry to hear it didn't wow you guys, but it seems like you always have fun with joint reads!