Blodeuedd's Monday Review: Five Daughters Out at Once by Jayne Bamber 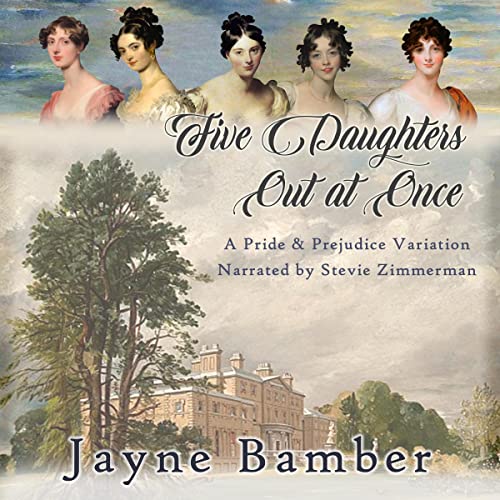 I do like a fun PP variation, and here I soon realised this would be quite different.

Mr Collins was still an asshat by the way.

But that is not what was different, no, there is to be a houseparty and suddenly a lot of other Austen men shows up. Mr Ferrars, Henry Tilney, Colonel Brandon among others. And even though this was pride and prejudice so manages to mix in Persuasion, Emma, Sense and Sensibility, Northanger Abbey for some Gothic mystery, and Mansfield Park. Very well done.

Lots of drama, new love interests, a Darcy that is really shy, a Georgiana who is writing a book, and a mystery.

A fun story since I never knew where it would lead me with all these new people in it. But at least one thing is constant. Lizzy will always get her Darcy in the end.

Stevie Zimmerman was a great narrator. Considering the cast of character she did well with different voices. You always knew where you had everyone. She was a really good fit for this book and made it truly enjoyable.

After the untimely death of their parents, Elizabeth Bennet and her sisters are left to make their own way in the world, and the dubious decision to stay at Longbourn until they are forced out leads to chaos and confrontation two years later, when their cousin Mr. Collins comes to claim his inheritance. Hot on his heels is his noble patroness, Lady Catherine de Bourgh, a woman consumed by grief of her own after the loss of her husband and daughter in a terrible fire at her estate, Rosings Park. While her nephew Mr. Darcy is shocked by his aunt’s interest in the five orphaned girls, her niece Georgiana thinks it just the thing to soothe the dowager’s low spirits. Moved by the bonds of sorrow and a shared contempt of Mr. Collins, Lady Catherine offers the Bennet sisters her protection and assistance in society – and what better way to help them than to find them all rich husbands?

Much to her chagrin, Lady Catherine is not the only one to meddle in Meryton’s marriage mart – Richard Fitzwilliam joins her, at leisure to make mischief, Charlotte Lucas, now an heiress in her own right, has a secret of her own, and Georgiana Darcy finds herself inspired to write a novel that will document – and change – the lives of her new friends.

Tensions rise between Elizabeth Bennet and Fitzwilliam Darcy as they both bristle at Lady Catherine’s plans – for very different reasons. Misapprehension and misunderstandings abound and plans go awry as the great lady rents Netherfield Park and hosts a horde of single gentlemen in possession of good fortunes, who must be in want of wives. Will the Bennet sisters find love and happiness? What other Austen heroes and rakes might appear in the once dull village of Meryton? Will Darcy and Lizzy overcome the obstacles of their own making?

Agreed! It does look good!