Blodeuedd's Monday Review: Married to the Viscount by Sabrina Jeffries 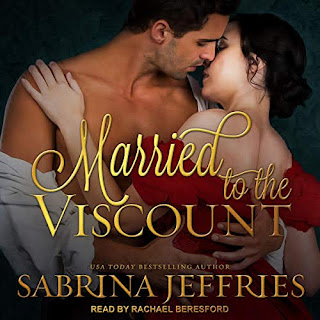 Abigail was married by proxy to a viscount. She remembers Spencer fondly and is looking forward to a new life.

She is half native American. She can make potions. Her father left their company to her new husband. She is opinionated . She is American *gasps*

While Spencer has a stick up his butt. He loves his work at the Home office. He doesn't want kids. He doesn't want a wife. He was very gruff. But he had that goodness inside that he didn't let out.

Until they meet. And argue cos wtf I didn't marry you?! And argue. And are upset and lust after each other

I enjoyed it cos he had his silly reasons that sure I understood but let it go man!

Abigail Mercer was thrilled at being reunited with Spencer Law, whom she met once and later married by proxy. But now Viscount Ravenswood denies all knowledge of their union! Too many witnesses have made it impossible for the secretive Spencer to reject his bride without causing a scandal. So he has proposed a marriage in name only until they can locate his mysteriously absent younger brother - who is responsible for everything! - and untangle this messy affair.

Abigail is incensed, irate...and irresistibly attracted to this handsome, infuriating man who hides his smoldering passion behind a proper exterior. So the lady will agree to his terms on one condition: Spencer must seal their bargain with a kiss. But he finds that one deep, lingering, unforgettable kiss isn't nearly enough. And keeping his hands off his pretty wife is going to be much harder than he thought.
Written By Carole Rae at 6:30 PM

Ha! They both sound fun and that marriage by proxy makes things interesting from the get-go. :)