B's Monday Review: Vacuum in the Dark by Jen Beagin 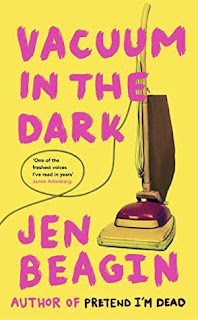 I honestly do not know what I was supposed to feel about this book. For writing she will get a good grade, but, yeah I do not know.

Everyone seemed to want to sleep with Mona, every man and woman she met.
Then she has flashbacks of her creepy pedo grandpa.

She cleans around with houses, befriends her employers, since everyone also wants to be her friend, and do her

spoiler
Was Dark her father? The end was so unclear and weird. But he had another last name. God, I do not know. This was a effed up book filled with incest, rape and wtf. LIKE WTF  spoiler

Maybe cos I had nothing else to read, but wtf was this book. I do not recommend it. But it was still good, I just wished that it would not have been so creepily sexualized.

Also laugh at loud? What, no, sure she finds poop everywhere in a house, but that is it

Mona is twenty-six and cleans houses for a living in Taos, New Mexico. She moved there mostly because of a bad boyfriend—a junkie named Mr. Disgusting, long story—and her efforts to restart her life since haven’t exactly gone as planned. For one thing, she’s got another bad boyfriend. This one she calls Dark, and he happens to be married to one of Mona’s clients. He also might be a little unstable.

Dark and his wife aren’t the only complicated clients on Mona’s roster, either. There’s also the Hungarian artist couple who—with her addiction to painkillers and his lingering stares—reminds Mona of troubling aspects of her childhood, and some of the underlying reasons her life had to be restarted in the first place. As she tries to get over the heartache of her affair and the older pains of her youth, Mona winds up on an eccentric, moving journey of self-discovery that takes her back to her beginnings where she attempts to unlock the key to having a sense of home in the future.

The only problems are Dark and her past. Neither is so easy to get rid of.

A constantly surprising, laugh-out-loud funny novel about an utterly unique woman dealing with some of the most universal issues in America today, Vacuum in the Dark is an unforgettable, astonishing read from one of the freshest voices in fiction today.
Written By Carole Rae at 6:30 PM

Nice to have a light time

Oh that cover and title. LOLLL

Strange, but I can see why you kept at it. Scary amusing work incidents for her.

Ooops, I am BEHIND: Also the spoilers shows here, my bad