Feature & Giveaway: A Flame Through Eternity by Anna Belfrage

A Flame Through Eternity by Anna Belfrage

It started 3,000 years ago. It ends now. Who survives the final confrontation?

According to Helle Madsen, being the protagonist of a time-spanning epic love story has some things going for it, primarily Jason Morris. Because seriously, meeting up with your fated lover after 3 000 years apart is not badóat all. Unfortunately, where Jason goes, there goes Sam Woolf, yet another very, very ancient acquaintanceówith the fundamental difference that Sam is not into Happily Ever After. Heís into destruction, more specifically of Jason and Helle. Helle may believe in second-chance love, but she sure doesnít believe in reincarnation. Okay, she didnít believe in stuff like that until she met Jason Morris a year or so ago. By now, she has accepted that sometimes impossible things are quite, quite possibleólike an ancient princess being reborn as an ambitious financial analyst. Finding Jason was like finding the part of her that had always been missingóa perfect match. But handling Sam Woolf, the reborn version of their ancient nemesis is something of a trial. No sooner do you have him well and surely beat, but up he bounces again. Sheesh, will it take an oak stake to permanently rid their lives of him? Sam Woolf is a powerful adversary. Too powerful, even. Jason and Helle will need help from unexpected quarters to finally bring this tangled, ancient love-and-hate triangle to some sort of conclusion. Question is, will they survive the experience?

Had Anna been allowed to choose, sheíd have become a time-traveller. As this was impossible, she became a financial professional with three absorbing interests: history and writing. Anna has authored the acclaimed time travelling series The Graham Saga, set in 17th century Scotland and Maryland, as well as the equally acclaimed medieval series The Kingís Greatest Enemy which is set in 14th century England. (Medieval knight was also high on Annaís list of potential professions. Yet another disappointmentÖ) With Jason and Helle, Anna has stepped out of her historical comfort zone and has loved doing so. Find out more about Anna by visiting her website, www.annabelfrage.com, You can also connect with Anna on Facebook, Twitter, Amazon, and Goodreads. 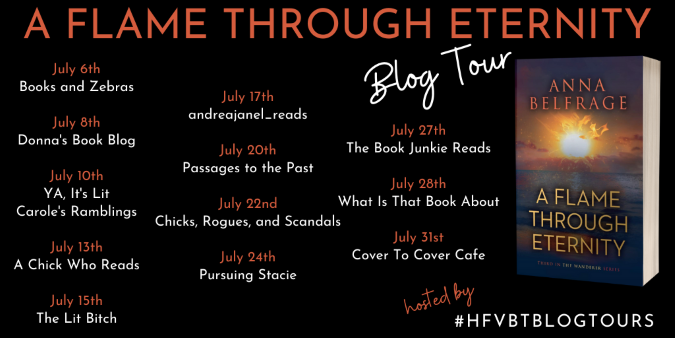 During the Blog Tour, we are giving away 2 paperback copies of A Flame Through Eternity! To enter, please use the Gleam form below. Giveaway Rules Giveaway ends at 11:59 pm EST on July 31st. You must be 18 or older to enter. ñ Paperback giveaway is open internationally. Only one entry per household. ñ All giveaway entrants agree to be honest and not cheat the systems; any suspicion of fraud will be decided upon by blog/site owner and the sponsor, and entrants may be disqualified at our discretion. The winner has 48 hours to claim prize or a new winner is chosen. A Flame Through Eternity

Thank you so much for hosting Anna's tour!

Lovers through out the ages, aww

Amy, thanks for including me!

Wow, three thousand years... I imagine this is an epic conclusion then.