Blodeuedd's Monday Review: Tempt Me at Twilight by Lisa Kleypas 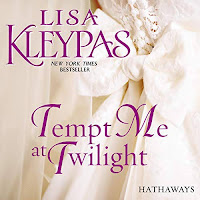 I forgot to write my review when it was fresh in my mind! How?

Poppy is nice sweet and wants to marry a good man, have a nice house and kids. A nice respectable and quiet life. Because her family is rather messy and scandalous.

Harry is, well kind of an asshole, nah, a bit of a sociopath, hmm, yes maybe. He is ruthless, but he does show kindness. He is powerful, but does think about others. He will do anything to get what he wants, yes that is true.

And he wants Poppy, so he does anything he can do get her. And well obvi he does it the wrong way. Oh I would hate him, but then the guy Poppy liked did not really make an effort. If you loved her you would have done anything!

Marriage of Must. They have to marry. And she learns to see there is more behind that ruthlessness, and so do we. And I really do like him, because he is kind, but that always borders on something else. He learns and I enjoyed the journey.

Great narrator that puts voices to these characters. A good range and I especially like the lazy rake voice of Poppy's brother. It fits him so well

It makes it a good book listening to

Though she adores her quirky family, Poppy longs for a conventional life. But nothing, especially love, is ordinary when you’re a Hathaway....During a stay at the magnificent Rutledge Hotel in London, effervescent Poppy Hathaway captures the attention of Harry Rutledge himself. With his brilliant mind and ruthless nature, Harry does whatever it takes to get what he wants. Fascinated by Poppy’s sweetness and charm, he comes up with a devious plot to steal her from another man and marry her himself.

At first, Poppy is charmed by the handsome genius, who rescues her from scandal with an offer of marriage. But when she discovers how her new husband betrayed her, Poppy flees the marriage. Now it’s up to Harry to prove he can change his ways. Only by opening his heart, and loving Poppy with all the tenderness he’s capable of, will he convince her to give him another chance. And despite Poppy’s reluctance to forgive him, she realizes her shrewd, sexy husband may just turn out to be the man of her dreams.
Written By Carole Rae at 6:30 PM