B's Monday Review: Nothing Compares to the Duke by Christy Carlyle 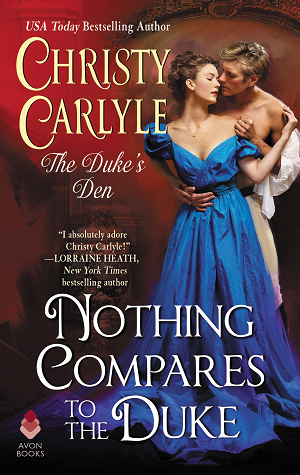 A no drama book. Those are sort of rare.

There is Bella who fell for her best friend Rhys, but he was busy with all the other ladies and being a, oh wait for it, rake! Shocking ;) So she was all bye!

Now he is back, he is a Duke, the estate is loosing money, his sister needs a season, and he needs to step up.

And Bella is entertaining suitors as a houseparty. And yes that is the story for much of the book. Them meeting again, talking, realising they still need each other, her knowing she never stopped loving him, and him noticing her for the first time for real.

And then they will live happily ever after. And Rhys will change his ways, and she can continue writing her books. All well that ends well.

Good narration. I enjoyed her voices and tone. And well I guess she was good for this lowdrama book too

PS. New blogger sucks!!! This took a lot of time to put together

Rhys Forester, the new Duke of Claremont, lives his life by four words: Enjoy All, Regret Nothing. He’s devoted to the pleasure of his wild soirees, reckless behavior, and shocking the ton with his interests in trade. The debts that come with his title don’t fit the carefree lifestyle he’s created, and when he’s forced to return to his family’s estate, he’s also forced to confront his one and only regret: the beautiful girl he left behind.

Arabella Prescott has been the belle of more balls than she cares to remember. After three seasons and five rejected proposals, she’s done with the marriage mart. Bella’s hopes to live a comfortable life, alone, come crashing down when her parents demand she marry. But her salvation may come in the form of the man she hates the most.
Bella has never forgiven Rhys for what he did to her, but desperate times call for fake engagements. With a few dozen rules, their scheme begins, but it’s not long before the former enemies find themselves breaking every single rule, including the most important of them all: don’t fall in love…

Gah. Ya - I made blogger go back to the original. I do not like the new formating.

No angst? Now, that can be a good thing at times when I'm done with drama.

I like no/low drama - and there is even a duke! Life it good.

Sophie,
I know right, shocking! No angst at all

Jen
Gotta love me some Dukes