B's Monday Review: Daughter of the Reich by Louise Fein 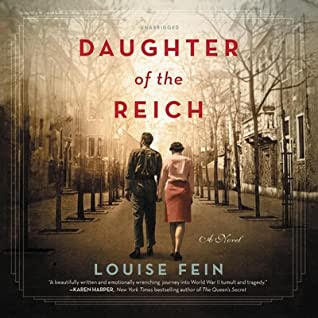 As the dutiful daughter of a high-ranking Nazi officer, Hetty Heinrich is keen to play her part in the glorious new Thousand Year Reich. But she never imagines that all she believes and knows about her world will come into stark conflict when she encounters Walter, a Jewish friend from the past, who stirs dangerous feelings in her. Confused and conflicted, Hetty doesn’t know whom she can trust and where she can turn to, especially when she discovers that someone has been watching her.

Realizing she is taking a huge risk—but unable to resist the intense attraction she has for Walter—she embarks on a secret love affair with him. Together, they dream about when the war will be over and plan for their future. But as the rising tide of anti-Semitism threatens to engulf them, Hetty and Walter will be forced to take extreme measures.

The truth of it is that I wished I dnfed this. I do not know what made it so, but at one point I had 12 hours left and was all OMG will this never end?! Yes, I should have given up then.

But I though maybe it will become interesting...but it never did. It could have been half as long. There was a lot of time with Hetty thinking, writing in her journal, reading newspapers and us hearing that. Hearing Hitler's voice in her head. So much that could have been cut, it kept building up and then fizzling to nothing.

I did like that fact that it showed how a perfect normal girl started thinking that Germans deserved better, buying into the rhetoric, and if anyone says but how could she?! Oh, really? People believe the earth is flat cos they read it somewhere, people are stupid sheep. Omg the bullshit people believe today or the people they follow. So yes these days more than anything I fully understand how she was taken in.

But she does see the light when she actually sees the consequences, there is where she differs. While others go along with violence and persecution, she thinks that wtf Hitler, no this is not right! And she wants to do something...but never does.

The romance could have been grander, but fizzled out too, a lot of mooning and why why, then do something!

And the end, I have never been this mad at an ending. I am fine with people dying in war books, I will cry and lament and move on. Here I just got angry cos it was depressing. view spoiler she gets pregnant, she gives the baby away. Epilogue, a short sentence on how she was raped so much and hate Russians. Cut to scene in cafe where she waits for her son in the 90s. End when he comes in. She had a shitty life all alone. END

It was boring and I wish I had never read it
Written By Carole Rae at 6:30 PM