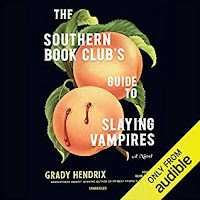 I did not know what to expect and when it started with a bunch of women in a book club, and Patricia going on with her life, and her MIL with dementia, and, yes then came the punch. A stranger moves to town. The book changed tone, got darker and it got me hooked.

Patricia likes her new neighbor, until doubt creeps in. Children are in trouble. Does her new neighbor have something to do with it? Oh and then the darkness started and I was all what is happening? It got me, it really got me.

So it's like horror thriller? Whatever it is it was good.

Patricia and her book club aren't exactly kick-ass, or they do not always have each other's back either. But hey I get it, when Patricia starts talking about her theories, and everyone else is all what are you saying`?! Well, I get how people would not believe things and how she would stop believing herself.

After that rather what is happening and slow start it got really good. It is certainly not your normal type of vampire book. It is horror, it is drama, it is a lot more.

I do want to try more from this author, since he does have that "Ikea" book. And the audio was a perfect format for it.

I have not tried this narrator before but she was good. Distinct voices. Great in tone and acting. She was everyone and really brought the thriller into it.

Fried Green Tomatoes and "Steel Magnolias" meet Dracula in this Southern-flavored supernatural thriller set in the '90s about a women's book club that must protect its suburban community from a mysterious and handsome stranger who turns out to be a blood-sucking fiend.

Patricia Campbell had always planned for a big life, but after giving up her career as a nurse to marry an ambitious doctor and become a mother, Patricia's life has never felt smaller. The days are long, her kids are ungrateful, her husband is distant, and her to-do list is never really done. The one thing she has to look forward to is her book club, a group of Charleston mothers united only by their love for true-crime and suspenseful fiction. In these meetings, they're more likely to discuss the FBI's recent siege of Waco as much as the ups and downs of marriage and motherhood.

But when an artistic and sensitive stranger moves into the neighborhood, the book club's meetings turn into speculation about the newcomer. Patricia is initially attracted to him, but when some local children go missing, she starts to suspect the newcomer is involved. She begins her own investigation, assuming that he's a Jeffrey Dahmer or Ted Bundy. What she uncovers is far more terrifying, and soon she--and her book club--are the only people standing between the monster they've invited into their homes and their unsuspecting community.
Written By Carole Rae at 6:30 PM

It sounds a bit different so I'm intrigued

Maria, thank you so much for stopping by!! And thank you! :) *blushes*

B, I am in love with that title!

Wow, This one sounds wild. SO glad you enjoyed it!