Blodeuedd's Monday Review: Daring and the Duke by Sarah MacLean 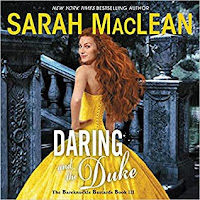 Narration
Justine Eyre is great narrating as always. She makes me forget that her male voices are actually her. She always sweeps me away with her range. I like how she does them.

Story
Did I think I would like Ewan after what he has done in the past 2 books? Not really, BUT, see, my memory is lacking. And it was a year since I listened to book 2, which means I had totally forgotten what an ahole he had been.

Ewan and his 2 half brothers was pitted against each other by their crazy ducal father. Grace was the Duchess' bastard who was made to pretend to be a boy until the Duke could get one of his bastards to take over. Ewan won, the rest fled for their lives, and built themselves as kings and queen of the bad part of London. Oh and Ewan hates his brothers cos he think they failed to protect Grace, and that is why he has been a total evil bastard for the last two books.

But she is alive. And she hates him. And he really loves her and would do anything for her. Damn, see there is where he got me, he loves her, all he ever did was for her.

And she is a true queen of the underworld. With her fancy brothel catering for women, her gang of spies and her security force of kickass women. She needs no man. But then she still loves him underneath that hate.

SO they spar. So he tries to win her back. It was another sort of book. Revenge, lost love and sadness.

Grace Condry has spent a lifetime running from her past. Betrayed as a child by her only love and raised on the streets, she now hides in plain sight as queen of London's darkest corners. Grace has a sharp mind and a powerful right hook and has never met an enemy she could not best...until the man she once loved returns.

Single-minded and ruthless, Ewan, Duke of Marwick, has spent a decade searching for the woman he never stopped loving. A long-ago gamble may have lost her forever, but Ewan will go to any lengths to win Grace back...and make her his duchess.

Reconciliation is the last thing Grace desires. Unable to forgive the past, she vows to take her revenge. But revenge requires keeping Ewan close, and soon her enemy seems to be something else altogether--something she can't resist, even as he threatens the world she's built, the life she's claimed...and the heart she swore he'd never steal again.
Written By Carole Rae at 6:30 PM

ooooo I wanna read it

Oh fun! A historical enemies to lovers in the London underworld.

This cover screams strong woman, and I love how fun the storyline sounds. I fall asleep on audioreads, but I would definitely read this one for sure! Hugs, RO

I got the first book in this series waiting for me on Audible. I have heard so many good things.

Sophia,
Oh yes the truly is the queen in the dark

RQ
Yes, that is the great thing, you can always read :)