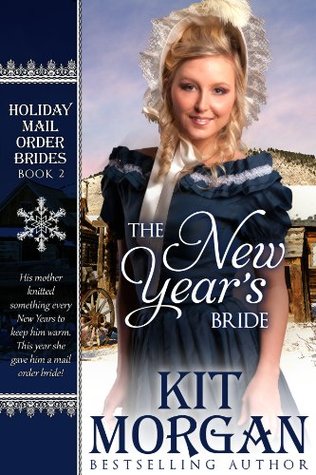 Sheriff Spencer Riley and his mother recently ordered his big brother Clayton a mail order bride for Christmas! Too bad neither one of them bothered to tell Clayton, so imagine his surprise, and Spencer thought it to be one of the funniest things ever...until it happened to him! "After all," his mother told him. "If Clayton can have a mail order bride for Christmas, why can't you have one for New Year's?" So much for the annual scarf and mitten set she usually got for him this time of year! Just what sort of mail order bride was HE going to get?

Elle Barstow spent most of her life at Winslow's Orphanage but now it was time to leave and either find a job (of which there were none) become a mail order bride, or take to the streets of New Orleans and hope for the best. Becoming a mail order bride looked like the safest option, but Elle soon learned things don't always go the way we think they will. Unwittingly involved in a horrendous encounter before she leaves New Orleans, Elle can't possibly marry her future husband when she doesn't know if she's considered guilty of murder! She figures her only chance is to avoid the law, not to mention her future husband, until she finds out what really happened. Easier said than done. Her future husband IS the law!

Book 2! I couldn't stop myself from starting right away. I wanted that brother of Clayton's to get his just dessert!

The story follows the new sheriff, Spencer, and his bride-to-be Elle. After helping Mama Riley get a mail order bride for his brother, Clayton, it is now his turn to be married off. Elle grew up an orphan at the same orphanage as Summer from the previous book. However, on her way to Nowhere, something terrible happens and she has to defend herself. She is haunted by the fact that she may have murdered someone. Sure, it was self-defense, but what if this comes back to bite her in the romp?

This was WAY better than book 1. 100% better. Sure, book 1 is important to the story...I guess...but I enjoyed this so much more. I was hooked from page 1. Yes, this is cheesy in some spots, but I wasn't annoyed at all.

I liked Elle and I liked Spencer. OMG people just talk to each other!!! Elle tell him what happened! Gah!

Again, this was technically"Christian", but I am glad the author keeps it to a minimum. God is mentioned naturally and realistically. It was very sweet overall.

I am so glad Charlotte and her terrible mother got a hair better in this. Sure, they are still terrible sometimes, but Charlotte gets a slice of humble pie a few times and it woke her up a bit. Yayy! I now want Charlotte to have a HEA. She needs a tough man who won't take her or her mother's scheming ways. But yes - she deserves love now.

OooooOOOooo that ending had me nervous. I figured it out, but I was still nervous on how everything was going to be fixed. Poor Elle. I would've been scared out of my mind!

The narrator did well. Again, the voices for the girls made me chuckle, but I felt they were better-ish. Or maybe I just got used to them?

Overall, I liked this WAYYY more than the last one. I liked Elle and Spencer more and the story wasn't AS cheesy as the last one. For sure worth it even if you skip the last one ;) I'll give this 4 stars. Quick, sweet, and funny.

Phew, minimum, I can do that. What I can not do is preachy

Melliane, yess it is rare!

B, right? A little bit makes it realistic.

Oh good! Love that this was a better outing for you with the series. Poor gal with her big burdensome secret.
LOL, glad that one of the characters is slowly redeeming herself and deserving of a romance.

Yes! I am tempted to do book 3 now. But I worry! And I am happy that girl is becoming a decent person now.